‘Tis warm, sunny, calm and dry at the Castle this morn, been dahn to Tesco on the second stale bread, gruel and his Maj’s food run of the week.
Monday his Whiskas meat selection in jelly cost £3.45 a box, this morn it was £2.00 per box...no wonder I am so confused....
And his Maj has discovered the joy of ambush from above-top of the wardrobe/up the tree... 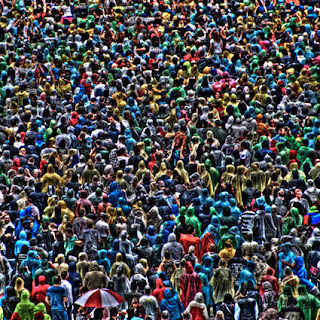 Has come up with yet another shit for brains load of old bollocks; they want us to send in our thoughts on “Gov” policy to develop new policy ideas.
Apparently ministers would ask people to suggest problems that the Government could try to solve before ideas were put out to formal consultation.
One idea involved “getting wide public input by ‘crowd sourcing’ questions to shape the definition of the problem, not just consulting on the solutions”.
Sir Bob Kerslake, the head of the Home Civil Service, said: "The default being that we develop policy in an open way with those who are more affected by the policy and collaborate in a more collaborative way."


So why do we need six hundred odd useless members in the leaning tower of Westminster then.... 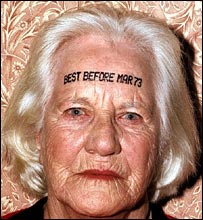 According to The Policy Exchange think-tank older workers are more likely to suffer long-term unemployment than younger ones.
To test employers’ attitudes to jobseekers’ age, the researchers sent applications for over 1,200 bar jobs and personal assistant positions, one from a 51-year-old and one from a 25-year-old.
According to a Policy Exchange report, the responses to the otherwise identical applications showed a “huge bias “against the older worker.
The 25 year-old received more than twice as many positive responses to applications for bar jobs. The younger applicant was half again as likely to succeed seeking personal assistant posts.
There are around 8.3 million people aged between 50 and 65 in employment, making up around a quarter of the entire UK workforce.
Around 440,000 older workers were unemployed at the end of 2011, and 43 per cent of them had been without a job for more than a year. By contrast, 35 per cent of unemployed 25-49 year olds were long-term jobless.
Of those workers currently unemployed, only 40 per cent of those aged over 50 can expect to return to work in the next 12 months, the report found. That compares to over 60 per cent for those aged under 25.

And according to the PPPMCC old age begins at 54, whereas ‘yoof’ ends at 32.


That’s me buggered then....the next step is for all old farts to have their expiry date tattooed on their foreheads.


East to the place that staged the last Olympics 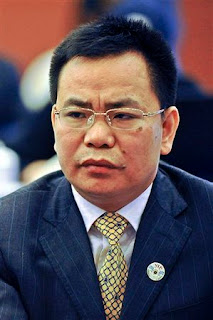 Rice trader Lin Chunping invented a U.S. bank and claimed he bought it.
State media reported that he had taken over Delaware-based Atlantic Bank. The acquisition brought him praise: His hometown gave him a prestigious political appointment and state media called his business experience "legendary."
But like a lot of WBanker he was a lying git, Chinese reporters could not locate an Atlantic Bank or a bank registration by Lin in Delaware.
He's under arrest for an unrelated fraud and has been forced to give up his municipal-level appointment to the Chinese People's Political Consultative Conference, the government's top advisory body.

Back in dear old Blighty-almost

Isle of Man-based Excalibur Almaz is offering seats to adventurers willing to go the extra mile on a historic journey to the Moon.
The first 500,000-mile round-trip in a converted Soviet-era space station could take place as early as 2015.
Art Dula, founder and chief executive has acquired two Soviet “Almaz” space stations, designed for orbital spying operations. Thrusters attached to the stations will convert them to long-distance spaceships.
Four re-entry capsules, or re-usable return vehicles (RRVs), will ferry three people at a time to the orbiting space station and return them to Earth.
All the space vehicles – the cost of which is confidential – are housed in hangers on the Isle of Man. One of the RRVs is currently being exhibited outside the Queen Elizabeth II conference centre in Westminster, London.

Pink Floyd will be chuffed....

East a bit to the stiletto of Europe 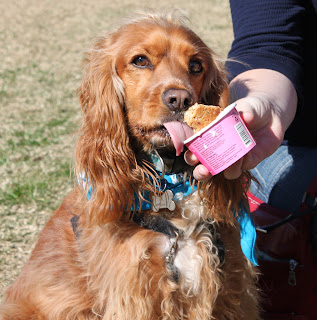 As it is so hot in the place where ruins excel an Italian ice cream maker has come up with Gelato for dogs, containing no milk, eggs or sugar, which are harmful to woofers and comes in vanilla, rice and yogurt flavours at the cost of a mere 2 Euros or abaht 5p in British at today’s exchange rate...


East even further than Europe to the fake place 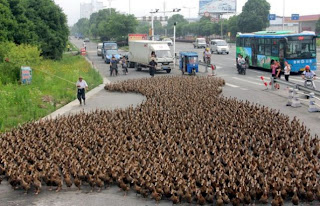 A farmer caused chaos when he walked his ducks almost 1.5km (1 mile) from his farm to a pond in a quest for food.
The mini migration was timed to avoid rush hour but commuters could not help but get caught up in the parade.
At one point, several scooters were marooned in a sea of brown but the ducks’ feathers remained unruffled
Farmer Hong – who was armed with just a (very) long stick and a few assistants – managed to make the journey without losing a single duck en route to the water.
He regularly undertakes the perilous journey in the booming coastal city of Taizhou, in China’s Zhejiang province, about 305km (190 miles) south of Shanghai.

Wonder how much orange sauce you would need for that lot.....


That’s it: I’m orf to probe stuff that may not exist


And today’s thought:
Brazilian at Wimbledon 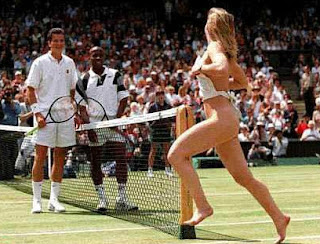 From Yahoo! News UK Ryanair passengers were shocked last month when Michael O'Leary threatened to "put a coin-slot on the toilet doors so that people might have to actually spend a pound to spend a penny, but all is OK, Ryanair spokesman for Germany, Anja Seugling, told the Ostthueringer Zeitung daily, "it was all just a gag," adding that O'Leary was probably just thinking out loud.


Oh only a joke; and I thought he was just taking the piss; and anyway he wouldn’t be able to fit it on the plane (see above)


Don’t try this at home: if you want to see tomorrow.


For sale: nagging wife, very high maintenance A British man fed up with his wife's complaints advertised her for sale -- and got a number of offers:

Bates, a self-employed builder from Gloucestershire, southwest England, snapped after his wife Donna on got on his nerves while she was watching television and decided to place the ad as a joke.

"She was nagging me for doing something small, while she was watching some rubbish on TV. So I just thought I'd put an ad in to get rid of her.

"I didn't think anyone would ring up but I've had at least nine or 10 people calling about her. It's gone mad. There was no one I knew -- just people asking, 'Is she still available?'"

The couple only married last year.

Any bets on the second anniversary?

AnanovaA German mathematician who died 450 years ago has been sent a letter demanding that he pay for a TV licence.

Germany's GEZ sent the bill to the last home address of algebra expert Adam Ries, who bought the property in 1525.

"We received a letter saying 'To Mr Adam Ries' on it, with the request to pay his television and radio fees," said Annegret Muench, who now heads a club honouring the mathematician, which uses the house as its HQ.

Miss Muench returned the letter to the GEZ with a note explaining the request had come too late, as Ries had died in 1559. But she still received a reminder a few weeks later

Don’t forget-you’re on the database.

A nice cup of tea.

Ananova A psychologist says tea and coffee really do taste better from your favourite cup or mug.

Dr Tom Stafford, of Sheffield University, says our brains are trained to believe the daily ritual of making coffee or tea should be done in a certain way.

"Drinking tea and coffee is very ritualistic and people become very addictive to the way they want their brew made," he told the Daily Telegraph.

"Caffeine is very much a drug of reward and like any addict, people develop passions on how the drug is delivered. Wherever there is drug use then rituals will always develop

According to research, 65% of Brits have a favourite cup or mug.


This is my contribution to the “chocolate” tax debate.


Ananova A Devon woman who eats 30 bars of chocolate a week has just celebrated her 100th birthday.

Peggy Griffiths, of Abbotsham, has scoffed an estimated 70,000 Cadbury's Dairy Milk bars in her time.

Her lifetime chocolate consumption has been estimated at an incredible four tonnes, reports The Sun.

Peggy said: "When I was young I could buy a bar of chocolate with my pocket money. It only cost tuppence and tasted exactly like it does now."

Her daughter Eileen Osborne, 69, said she ran a sweet shop in the 1930s but it went bust because she ate all the profits.

Eileen said: "When mum was a little girl, her mother told her that sweets were bad for you but chocolate was good.

"She absolutely loves it. She's a chocoholic and her diet agrees with her."

Ananova A parrot has caused chaos at a football match.

The parrot, Me-Tu was accompanying owner Irene Kerrigan to a game between Hertfordshire Rangers and Hatfield Town.

Ref Gary Bailey, 45, told the Daily Mirror: "I've never known anything like it. This woman was standing right by the touchline and suddenly unveiled this big green parrot.

"Every time I blew my whistle the bird made exactly the same sound.

"The players all stopped so I had to ask her to move the parrot."

He added: "I've never sent off a parrot before."

Apart from his whistling, Me-Tu also shouted "pretty boy" at the players from his cage on the sidelines.


Oh yes we did

Baseball 'invented in Britain' Local historians in Surrey have confirmed that baseball was played in the UK more than 20 years before American independence.

A diary that documents a game being played in Guildford in 1755 has been verified by Surrey History Centre.

William Bray, a Surrey diarist and historian from Shere, wrote about the game when he was still a teenager.

Julian Pooley, Surrey History Centre manager and William Bray expert, said the diary showed the game was a well-established sport in the 18th Century and was played by men and women.

Mr Pooley said: "He kept lots and lots of diaries that we have in the Surrey History Centre but last year a new one was discovered in a garden shed and it contains his diary from 1754 to 1755.

"It contains a reference to him playing baseball. What intrigued me is he is playing it with a load of young ladies."

“I married beneath me; all women do. Nancy Astor

NHS-THE OTHER SIDE
Posted by Angus Dei at 06:52 1 comments