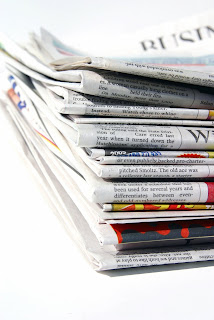 Before I start just a quick mention that the Government has had their worst week, well, since last week anyway, roll on next week!


First up is-how not to get a job: how grammatical errors see CVs binned - Telegraph

Experts found that 94 per cent of job hunters risked missing out on vacancies through poor spelling, grammar or presentation on their CVs.
In some cases, applicants' attempts to impress potential employers failed through the odd missed word, with phrases such as: "I was responsible for dissatisfied customers."
For others, the omission of a single letter consigned their CV to the dustbin: "I am a pubic relations officer."
And sparing use of the comma led to seemingly embarrassing disclosures of equal note: "My interests include cooking dogs and interesting people."
From a sample of 450 CVs, researchers found that 81 per cent were laden with spelling and grammatical errors, while nearly half were poorly laid out.
A mere 6 per cent were error-free, the study by career advisers Personal Career Management (PCM) concluded.
Mistakes were not confined to applicants for menial roles either – many of the CVs riddled with errors were drafted by CEOs, professionals and recent graduates, researchers said.
Examples of CV blunders:
– My interests include cooking dogs and interesting people.
– As security guard my job is to pervert unauthorised people from coming onto the site
– I am a pubic relations officer
– I was responsible for dissatisfied customers
– My role involved coaching and mentioning
– I have excellent editing and poof-reading skills
– I relieved the conference manager
– I am a prooficient typist
– Socially I like to dine out with different backgrounds
– I get well with all types of people
– I was responsible for fraudulent claims
– While working in this role, I had intercourse with a variety of people
– Experienced sheet mental worker
– Highly adept at multi-tasting
– Left last four jobs only because the managers were completely unreasonable
So that’s why……


This one winds me up: TV classic Last of the Summer Wine among BBC targets for comedy culling - mirror.co.uk It is a vintage 37 years in the making and the worlds longest-running sitcom.But the axe may be about to fall on Last of the Summer Wine as the BBC carries out a comedy cull.It has already shelved Only Fools and Horses spin-off The Green, Green Grass.It follows in the wake of Nicholas Lyndhursts sitcom After Youve Gone and Lee Macks Not Going Out.Now, Summer Wine has been told it will not film a new run this summer sparking fears it will be axed. Creator Roy Clark said: We dont get enormous ratings these days. No one would be surprised if it goes.The shows highest audience was 18.8million in 1985. The current series the 30th gets around three million.

What is the matter with the knobs at auntie, don’t they think we want to laugh anymore, it seems that “proper” comedy without swear words or sex is now going to be confined to the bin.


I have watched “summer wine” since it started, it is a british icon, we need programmes that are decent and clean, come on BBC keep the good ones and dump the violent, sexual american “entertainment”.

This one is open for discussion- mirror.co.uk A have-a-go hero foiled a robbery by chasing a gang of thieves - wearing his wife's pyjamas.
Steve Hillier, 39, was woken by the sound of the two raiders trying to force the door of a goldsmiths shop near his home.
He grabbed the nearest clothes, sprinted over the road - and the men fled when he shouted at them.
Steve, of Lacock, Wilts, said: "I dashed after them, without realising I had put on my wife's yellow and red pyjama bottoms."
Yeah right!


Brains of Britain- mirror.co.uk
Alex Trelinski (Late Show, BBC Midlands): What is the capital of Italy?
Contestant: France. Alex: France is another country.
Try again. Contestant: Oh, um, Benidorm.
Alex: Wrong, sorry.
Let's try another question. In which country is the Parthenon?
Contestant: Sorry, I don't know.
Alex: Just guess a country.
Contestant: Paris.
Answers: Rome and Greece
Anne Robinson (The Weakest Link, BBC2): Oscar Wilde, Adolf Hitler and Jeffrey Archer have all written books about their experiences in: Prison or the Conservative Party?
Contestant: The Conservative Party.
Answer: Prison
Jeremy Paxman (University Challenge, BBC2): What is another name for "cherrypickers" and "cheesemongers"?
Contestant: Homosexuals.
Paxman: No. They're regiments in the British Army who will be very upset with you.
Phil Wood (BBC Radio Manchester): What's 11 squared?
Contestant: I don't know.
Phil Wood: I'll give you a clue. It's two ones with a two in the middle.
Contestant: Is it five?
Answer: 121
Richard Madeley (Richard and Judy): On which street did Sherlock Holmes live?
Contestant: Er...
Richard: He makes bread.
Contestant: Er...
Richard: He makes cakes.
Contestant: Kipling Street?
Answer: Baker Street
Question (BRMB Radio): What religion was Guy Fawkes?
Contestant: Jewish.
Host: That's close enough.
Answer: Roman Catholic
Steve Le Fevre (The Biggest Game in Town, ITV): What was signed to bring World War I to an end in 1918?
Contestant: Magna Carta?
Answer: Treaty of Versailles
Phil Wood (BBC GMR): What 'K' could be described as the Islamic Bible?
Contestant: Er...
Phil: It's got two sylla-bles... Kor...
Contestant: Blimey?
Phil:Ha ha ha, no. The past participle of run...
Contestant: Silence
Phil:Okay, try it another way. Today I run, yesterday I...
Contestant: Walked?
Answers: Koran&ran
Melanie Sykes (The Vault): What name is given to the condition where the sufferer can fall asleep at any time?
Contestant: Nostalgia.
Answer: Narcolepsy
Steve Wright (Radio 2): Johnny Weissmuller died on this day. Which jungles-winging character clad in a loin cloth did he play?
Contestant: Jesus.
Answer: Tarzan
Chris Searle (BBC Radio Bristol): In which European country is Mount Etna?
Contestant: Japan.
Chris: I did say European country... I can let you try again.
Contestant: Er... Mexico?
Answer: Italy
Paul Wappat (BBC Radio Newcastle): How long did the Six Day War between Egypt and Israel last?
Contestant: (long pause) 14 days.
Answer: Six days
Daryl Denham (Virgin Radio): In which country would you spend shekels?
Contestant: Holland?
Daryl: Try the next letter of the alphabet.
Contestant: Iceland? Ireland?
Daryl: It's a bad line. Did you say Israel?
Contestant: No.
Answer: Israel
JAMIE THEAKSTON: Where is Cambridge University?
CONTESTANT: Geography isn't my strong point
JAMIE THEAKSTON: There's a clue in the title
CONTESTANT: Leicester?
LINCS FM DJ: Which is the largest Spanish-speaking country in the world?
CONTESTANT Barcelona
LINCS FM DJ: I was really after the name of a country
CONTESTANT; I'm sorry, I don't know the name of any countries in Spain
GWR FM DJ: What happened in Dallas on November 22, 1963?
CONTESTANT I don't know, I wasn't watching it then
ROCK FM PRESENTER: Name a film starring Bob Hoskins that is also the name of a famous painting by Leonardo da Vinci
CONTESTANT Who Framed Roger Rabbit?
BEACON RADIO DJ: What is the nationality of the Pope?
CONTESTANT I think I know that one. Is it Jewish?
BAMBER GASCOIGNE What was Gandhi's first name?
CONTESTANT Goosey?
JAMES O'BRIEN, LBC: How many kings of England have been called Henry?
CONTESTANT Er, well, I know there was a Henry the Eighth.. er, er, three?
LOTTERY HOST: What is the world's largest continent?
CONTESTANT The Pacific?