Arse about face Blighty: Pippa who?: Foxy conveyor: A hairy dilemma: Cool motor: and the Naked rambler gets nicked-again. 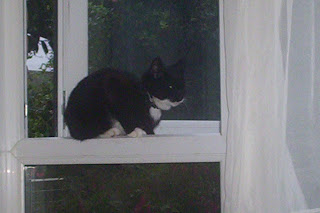 Not a nice start to the day at the Castle this morn, wet, coolish and dismal, his Maj has the hump because he can’t go out, the study is nice and empty and the Bank holiday weekend starts here.
What is left of my mind is more than a bit befuddled by this tale 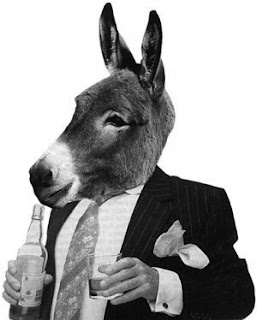 A failed asylum seeker who committed more than 25 crimes within six years of arriving in the UK is in line for "substantial" damages after a judge ruled he had been unlawfully detained by immigration authorities.
Amin Sino is set to receive damages from public funds running into tens of thousands of pounds while taxpayers will also pick up the bill for his legal costs estimated at up to £50,000.
Deputy High Court Judge John Howell QC accepted that the public would be "outraged" by the ruling in favour of Sino, who deliberately misled officials about his identity in a bid to thwart deportation to his native Algeria, and had proved to be a "risk to the community".
But, in a written ruling following a hearing in London, he said that an immigrant's failure to cooperate with authorities was not a justification for detention.
Bollocks.

Over in the very ex colonies 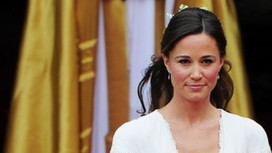 It seems the Americans aren't very taken with Kate's younger sister.
According to a survey by Vanity Fair magazine, the majority of Americans have no clue who Pippa Middleton even is.

When asked 'Who is Pippa Middleton?' 32 per cent correctly identified her as a 'British socialite' while 52 per cent didn't know as six per cent thought she was a children's book heroine.

Finally two per cent though Pippa was an adult film star.
Fame is such a fleeting thing.
Back in broken Blighty 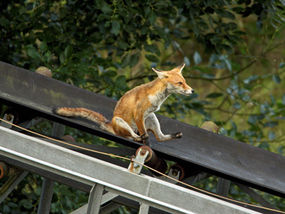 A Fox with a sense of fun uses all his wiles to turn a derelict quarry conveyor belt into a makeshift slide.
The four-month-old cub even appears to grin with delight as he speeds down the chute before climbing up to have another go.
His escapade was caught by British cameraman Duncan Usher at a disused gravel pit in Bursfelde, Germany. Mr Usher, 56, said: “The fox sat on the belt and, after a few seconds, started to slide down using its front paws to drag itself forwards.
Or maybe he has the worst case of worms in the world....

According to “experts”
Research has shown that one in three women leave the shower running while they shave their legs, wasting around 50 billion litres of water a year.
Thames Water, which commissioned the study, said the amount wasted would be enough to supply the whole of London for 25 days.
The research also found that one in four people leave the sink tap running while they brush their teeth, which accounts for around 120 billion litres of water wasted per year.
A spokesman for Thames Water said yesterday: “It may seem like it’s always raining, but we’ve had below average rainfall across our region for nine of the past 12 months.
Another excuse for putting prices up...
Back over to the big bit of land on the left 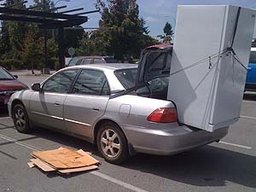 Police were called to a parking lot in Richmond, B.C., earlier this month where they found a man trying to load a full-sized fridge into the trunk of a four-door sedan.
"The fridge was one-third in the trunk while the remainder teetered over the edge of the car's bumper," Const. Justin Stewart said in a release. "The fridge was secured to the vehicle using rope and the seatbelts from the car."
Stewart said the driver told him he thought what he was doing was OK and apologized after he was told that the load was unsafe for transport.
He then removed the fridge from the trunk of his car and arranged for a less precarious mode of transportation, police said.
Numpty
And finally:
North of the border 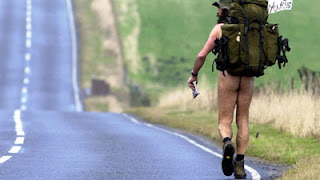 The so-called Naked Rambler is back behind bars after stripping off less than a minute after being released from prison.
Stephen Gough, 52, was arrested outside Perth Prison almost immediately after he was released from his previous 21-month sentence.
He has now been jailed for another 21 months after turning up naked for his trial at Perth Sheriff Court, reports the BBC.
The hearing was initially held up while court staff found a sheet of brown paper for him to sit on "for hygiene reasons".
Gough appeared naked in the court dock and was found guilty of breaching the peace and being in contempt of court.
Sheriff Fletcher told him: "The court expects people to come here in a decent state of dress."
Gough earned the title Naked Rambler by walking unclothed from Lands End to John O'Groats after quitting his job as a lorry driver.
The former Royal Marine, from Eastleigh in Hampshire, has been behind bars in Scotland for much of the past decade.
He has been repeatedly arrested in the street outside Perth Prison by police waiting for him to be released at the end of each sentence.
He claims that arresting him for walking around naked is a breach of his human rights and his right to freedom of expression.

Naked Numpty.
That’s it: I’m orf to Serpens to stake my claim.
And today’s thought: Lead me not into temptation . . . I can find my own way there.