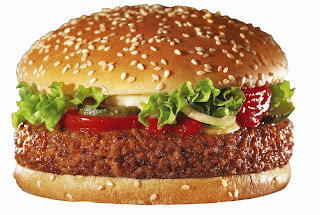 Fancy a PHD? Mc Donalds is hoping to offer PhDs, after receiving approval to award its own nationally recognised qualifications in Britain, the company's "chief people officer" said Monday.

"One day, I'd love to see us doing a PhD, I definitely think we should go as far as we can," he told the business daily.

McDonald's was one of nine employers or employer groups last year that received the power to award qualifications, which Britain wants to encourage so that more workers will have recognised certificates to increase their employability.

A PHD in burger toppings, acceptable in all government departments.

From The Register Brown red in face after blusher found in cab as if he hasn’t got enough problems, Gordon Brown acquired another light dusting of woe when his make-up bag was left in the back of a taxi last week.

Rather more seriously the bag, left by a junior aide, also contained information on how he and Home Secretary Jacqui Smith would be getting to Yorkshire for an official visit.

Brown starts with an illuminating foam then a touch of concealer for under his eyes. Stage three is Clinique super-balanced make-up which goes all over his face and eyes, followed by a touch of terracotta Guerlain powder for that bronzed look, the Sun reports.

Too little too late.


Then there’s this Swedish chopper chief demands fireproof bras A Swedish chopper fleet commander has demanded that his female pilots be granted the same degree of fireproofing enjoyed by their male counterparts - in the form of flameproof bras.

Group Captain Micael Byden insisted the existing underwear issued to the flygirls simply isn't up to the standard enjoyed by the boys. He told local paper Ostgota Correspondenten: "It is a question of basic safety. You can not have anything close to the body that can be set alight when you are flying."

Byden apparently also expressed doubts that "fireproof panties are being provided to female flyers", and he "guessed" that they are probably obliged to don male anti-nad-roast smalls.

While the Swedish armed forces' failure to address this jub-protection issue is somewhat disturbing, we're heartened by the fact that their sensitive handling of female operatives evidently prevents Byden from simply asking his chopper gals what kind of knickers they're wearing.

I’ve heard of burning your bra but that’s a bit over top.


Google hires goat army for lawn maintenance Google said on the 2nd of May that it has enlisted a small army of hungry goats to help manicure the expansive fields at its Mountain View headquarters.

The internet's top ad broker wrote in its official blog that the goats are hired from a local goat rental business to clear weeds and brush to reduce fire hazard.

A herder brings about 200 goats and they spend roughly a week with us at Google, eating the grass and fertilizing at the same time. The goats are herded with the help of Jen, a border collie. It costs us about the same as mowing, and goats are a lot cuter to watch than lawn mowers.

But you don’t get that lovely smell of freshly mown grass, just the stink of goat C##p.

Just to prove how loony it has all got the-World's Most Bizarre Magazines:

Sheep magazine
It makes you glad to be “normal” doesn’t it: what?


“Stuff your eyes with wonder . . . live as if you'd drop dead in ten seconds. See the world. It's more fantastic than any dream made or paid for in factories.” Ray Bradbury

NHS-THE OTHER SIDE
Posted by Angus Dei at 07:49 2 comments