Oh dear-what a shame: Just in case: Half a Navy: Norfolk alligators: Empty tank: Potty superstore: and How to catch a Tiger.

‘Tis much cooler at the Castle this morn, a bit of cloud, a bit of breeze and comfy, the kitchen is empty of laptops, desktops and mop tops, the butler is on a few days holiday and his majesty has discovered the joy of badly timed jumping across huge distances and attacking ankles.
I see that “new” MPs are whingeing on about ‘long hours and workloads’

Apparently they are finding the combination of long hours and a heavy workload a struggle, and worry the job is harming their family lives, research suggests.
A survey by the Hansard Society of the 227 MPs elected for the first time in 2010 suggest the new intake are working an average of 69 hours a week.
Tough shit: Be careful what you wish for….

Next year the Olympics could be given a bit of help 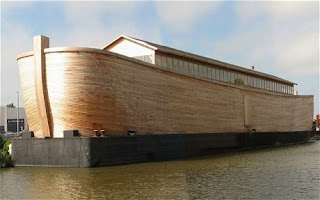 Johan Huibers, an eccentric Dutch Christian, has spent around £1 million building the "Ark" after dreaming about a great flood sweeping Holland. He saw the dream as a signal to spread God's message.
The vessel is 450ft long and 75ft wide and will be stuffed with pairs of model animals, while an aviary with free-flying live birds will take up most of the enormous deck house.
Mr Huibers, 60, who is married, found the inspiration for the project 20 years ago but only started construction on the river at Dordrecht, near Rotterdam, three years ago, against the advice of his wife.
Twenty-five barges held together by a steel frame form the base of the ship, which also holds two conference rooms capable of hosting 1,500 people.
The timbers are Swedish pine, a choice Mr Huibers made because Noah, the Biblical Ark's captain, was told by God to use "resin wood".
Mr Huibers recently wrote to Boris Johnson, the Mayor of London, to ask for permission to bring his Ark to London for the Olympic Games next summer and moor it in the capital.
Boris was heard to say “Err, um, harrumph, well…”
Now that we only have half a Navy 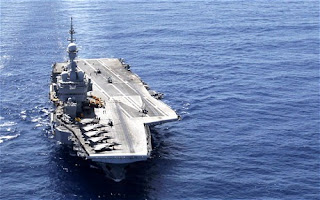 Britain and France are set to share an aircraft carrier as part of plans for far closer integration between the two navies, the head of France’s fleet has said in an interview with The Daily Telegraph.
Admiral Pierre-Francois Forissier also disclosed that the French navy was amazed by the swath of cuts last year that severely reduced the Royal Navy with the axing of aircraft carriers and Harrier jump jets alongside warships.
“From a French standpoint, I have to say that we were really stunned because the Royal Navy has always been a model for us and it is now faced with a very difficult situation,” he said.
Join the club admiral.

Up in the bit above Suffolk 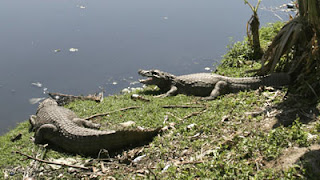 Police are investigating reports of two alligators being spotted at a holiday park lake - in Norfolk.
A visitor claimed he saw the reptiles on the surface of the water, reports The Sun.
Worried holidaymakers and fishermen are now keeping watch for the pair at 60-acre Waveney Valley Lakes in Wortwell.
Park manager Dave Potter, 58, said: "It has caused quite a stir. We have 90 plots for caravans and lodges, so there are a lot of people here. The police had a good look around but didn't find anything."
Norfolk Police said a member of the public reported the alleged sighting. It added: "One of our officers visited the owners of the venue to make them aware of the claim."
No one knows how the creatures may have got there. Alligator expert Dr Laura Brandt said: "It is possible they have been released or have found their way to the water."
Have they still got water up there?-lucky buggers...
Across to Manchester 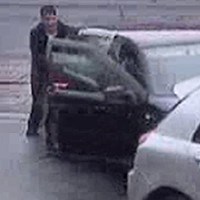 A pair of petrol thieves handed police a vital clue after their own car ran out of fuel.
The men suspected of stealing almost £1,000 worth of petrol in a spate of station drive-offs, were caught on CCTV pushing a Volkswagen Golf into a forecourt.
After filling up their tank, the pair once again drove off without paying.
Pc Pete Baldwin, of Longsight and Ardwick neighbourhood policing team, said: "This is the kind of thing you see on television and it is ironic that the two men appear to run out of petrol after we believe they have stolen hundreds of pounds worth of fuel.
"The images may be amusing to people but I can assure you the offence is serious and we are determined to catch the offenders. I would urge anyone who saw these men or any of the vehicles to contact us."
As fuel prices soar, petrol thefts are thought to be an increasing headache for police. GMP believes the two men are responsible for up to seven separate petrol station drive-offs from forecourts in West Didsbury, Hulme, Withington, Bolton, Denton and Stockport.
The CCTV image shows a black Volkswagen Golf with stolen registration plates about to drive onto the forecourt of Tesco Express in Ardwick Green just after 7pm on May 5.
The vehicle then appeared to run out of petrol as the driver and passenger got out of the car and pushed it towards the petrol pump. The main offender is described as an Asian man, in his early 20s, of slim build and 5ft 10ins. Anyone with information should contact police on 0161 872 5050 or Crimestoppers on 0800 555 111.
Should have stolen a diesel.
Left a lot to the shaky bit of the States

California-based company weGrow is hoping to capitalise on the state's new medical marijuana law, which allows people to apply to use the drug to treat medical conditions including cancer, glaucoma and Alzheimer's disease.
While the store does not sell the plant itself, it sells around 2,000 products and services 'for people to safely and responsibly cultivate their medicine', according to weGrow founder Dhar Mann.
Products sold at the store include soil, grow lights, irrigation trays and nutrients to help aid the growth of cannabis plants.
The 21,000 square foot store also has an on-site doctor to give patients medical approval to apply for cards authorising them to grow and use marijuana legally.
Arizona is the 16th US state to decriminalise marijuana for medical purposes, although the cultivation, sale and distribution of cannabis still remains a federal crime.
The law is a weed.
And finally:
East many miles and then some 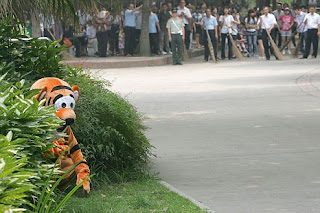 Chengdu zoo in China has been rehearsing a tiger escape using a man dressed in a furry costume.
The "Tiger" was hunted down with sticks, guns and, most bizarrely, brooms, before finally being cornered beneath some bushes.
Tigger was pinned down at gunpoint and carried off on a stretcher.
Pooh….
That’s it: I’m orf to interfere with light.
,
And today’s thought: With sufficient thrust, pigs fly just fine.