Scarecrows, witches, cheese and a bit of titillation 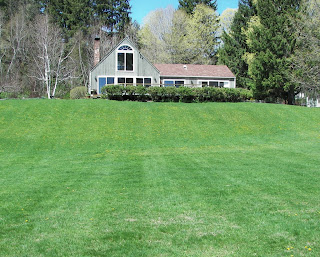 The rain has eased up, the sun is back and I have to mow the bloody lawn, but at least I have stopped “leaking” and my hair is dry for the first time in over a week.

But it seems that no matter what the weather is like there are always news items to amuse and amaze.

And I have a small confession, I started to watch the Michael Jackson memorial thing, for the first five minutes until they wheeled the body in……….. 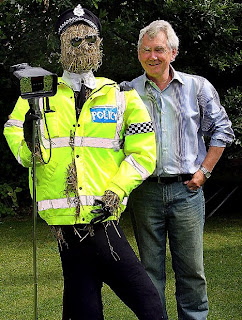 Police in Bancaster, Norfolk Have arrested and detained a scarecrow that was made to look like a copper with a speed gun.

The 7ft tall scarecrow was put up on the roadside to promote a village scarecrow festival while also encouraging speeding motorists to slow down.

However, a passing policewoman took it away in her patrol car within four hours of it being put up.

The scarecrow was later reported stolen by festival organiser Miranda Skillings, 56, who had earlier got permission from police to put up the fake traffic officer.

After three hours Norfolk Police located the scarecrow and an officer was sent to replace it.

However, Mrs Skillings was asked to remove the fake radar gun as the force believed it was giving out "an inappropriate message" and might confuse drivers.

Mrs Skillings said: "We get people to put up scarecrows in their gardens and funny places as a prelude to the fete. Last year we had around 50 in the village.

Insp Dave Buckley, of Norfolk Police's Hunstanton and Burnham neighbourhood policing team, said in a statement: "We gave permission for the organisers to create a scarecrow of a police officer - but the owner of the scarecrow used a plastic drinks bottle to symbolise a speed radar gun.

"As a result an officer removed the scarecrow as it portrayed an incorrect and inappropriate message to passing motorists. We appreciate the spirit of the family-oriented festival but our priority is the safety of motorists. 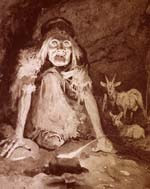 Wookey Hole needs a witch: the tourist attraction near Wells, Somerset, has advertised at the local Job Centre for someone to teach visitors about witchcraft and magic after its previous employee retired.

The successful applicant 'must be able to cackle' and 'must not be allergic to cats' but will enjoy a salary of £50,000 pro rata based on work during school holidays and at weekends.

"So the job is straightforward: live in the cave, be a witch, and do the things witches do."

Auditions for the role are being held on July 28 in front of a panel of judges who will assess applicants costume and character as well as the ability to perform witch tests.

"Ambitious witches, looking for a key career move, should turn up dressed for work and bring any essential witch accoutrements.

"A limited range of potion ingredients will be available.

"We are witchless at the moment so we need to get the role filled as soon as possible.

"We are looking for someone who is friendly, a little mischievous and with lots of character."


So if you want to fill Wookey hole’s hole, go for it. 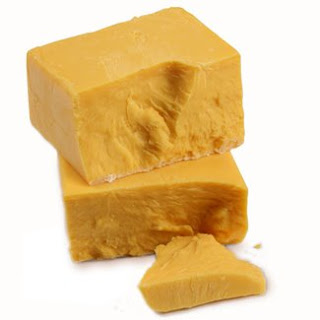 Tesco are so worried about losing money to shoplifters they have added security tags to ……..cheese.

Yep, the biggest retailer in Christendom thinks that cheddar has become a “luxury” item.
The store in Brockworth, Gloucester, has acted because of a spike in thefts following the economic downturn.

A Tesco spokesman did not say what rise in shoplifting there had been at the store, but said: "We have a number of security measures that we enforce in our stores across the UK.

"The decision to use security tags is always made by the manager of the store and tags are used on various items such as bottles of spirits, all at the manager's discretion."

The Retail Food Consortium added that electronic tags could soon be put on all supermarket food.

"We expect crime to go up during the recession," a spokesman said. "Shops will look at this and step up security."

Shoplifters are the scum of the earth, and in no way do I condone theft.

Tesco have more than doubled the price of cheese “because of the recession”, why not reduce the prices to a reasonable level, they can afford it and it would reduce the risk of food being stolen. 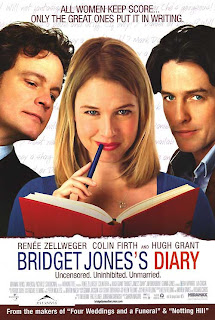 Titillation, now there’s a word I haven’t heard for a long time, but apparently a poll of nearly 2,000 women aged between 45 and 60 found that romantic fiction was the most popular genre – chosen by 35 per cent of those surveyed.

Nearly two thirds said they liked raunchy scenes in novels, and more than half described sex in books as "titillating".

A further 10 per cent of those questioned on their reading habits said they actively chose books which featured lots of sex scenes.

Meanwhile crime and mystery novels got 33 per cent of the vote, and other novels 31 per cent.
Top 10 books women would take to a desert island, according to the survey:

5 Murder on the Orient Express – Agatha Christie (8 per cent)

6 The Other Boleyn Girl – Philippa Gregory (8 per cent)

Reference books were the least popular. Among these, cookbooks were favourites, according to the survey by the moisturiser brand Astral.


Well a rolling pin isn’t “titillating” or is it? 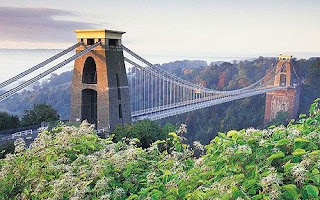 A bridge too fat Ambulances have been banned from crossing Clifton Suspension Bridge in Bristol because they are too heavy.

The vehicles will no longer be able to use the historic bridge to get to emergency calls.

Great Western Ambulance Service (GWAS) has sent a memo to paramedics informing them that they must not use the 150-year-old bridge, built by engineer Isambard Kingdom Brunel.

The Grade I listed landmark has a weight limit of four tonnes, but when fully loaded the new-style ambulances brought in last year weigh five tonnes.

The new emergency vehicles are fitted with additional equipment like CCTV cameras and a charging unit for defibrillators.

Instead ambulances will now have to use the A4 Portway and Brunel Way across the Cumberland Basin, a detour of around two miles, to get to and from North Somerset.

But rapid response vehicles will still be able to use the bridge and GWAS said the distance will be made up in crews being able to drive faster on the Portway and Brunel Way.

Melanie Glanville, spokesman for GWAS, said: "We do have to do a slight detour but the distance is made up in speed.

"Our vehicles have been getting heavier and we work closely with the bridge master so we know that if there is a dire emergency situation and traffic is bad in Bristol he will close the bridge so that we can still use it."

Fire engines are also unable to use the bridge.

All vehicles are weighed as they approach the suspension bridge and if the weight limit is exceeded an alarm is triggered and the barriers allowing access remain closed.

Angus Dei-NHS-THE OTHER SIDE
Posted by Angus Dei at 07:45 7 comments