Double H and Arnie; Show me the money; Send me home; That was the week; and Beware Low Bridge 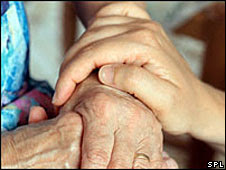 Really funny weather down ‘ere in ‘Ampshire today, dark, windy and cold, but blame me, I washed the car yesterday, and just to make my day perfect I have lost my glasses.

A couple of extras this morn:

The Tories have “promised” 'free' OAP life care Under the Conservatives' proposals, for a one-off payment of about £8,000, people in England would receive a guarantee that all fees for permanent residential care would be waived for the rest of their life.

So it’s not free then, and of course all pensioners have the odd eight grand laying about don’t they.

Tesco are lagging behind Sainsbury in the takings race, Tesco's underlying UK sales growth has lagged rivals in part because they have been reversing previous underperformance.

Tesco, which runs around 4,300 stores in 14 countries, is also more exposed to discretionary non-food items, which have suffered more than groceries in the recession.

Some of the underperformance has been self-inflicted as well. Tesco launched a cheaper range of discount brands in September last year, which helped to stem the flow of customers to hard-discounters like Aldi and Lidl in the recession, but also depressed the amount of money it takes at the till.

So that explains it, if stores reduce prices so that customers can afford to shop there they make less money, now there’s a novel idea. 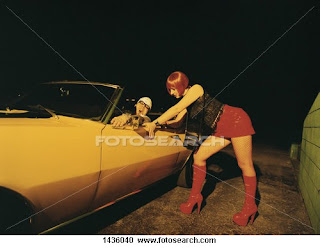 Double H (Harriet Harmon) has asked the terminator (A Schwarzenegger Esq.) to shut down a U.S. website that allows men to rate prostitutes, including many working in London.
Harriet Harman, minister for women and equality, told the ruling Labour Party's annual conference that "Punternet" fuels the demand for prostitution -- a vice she said degrades women and puts them at risk.
Pimps put women on sale for sex on the site then clients offered their comments on line, she said.
"Punternet has pages and pages of women for sale in London," said Harman, who is deputy leader of Prime Minister Gordon Brown's Labour Party.
She said she had raised the issue with the U.S. ambassador to Britain and asked California Governor Arnold Schwarzenegger to close it down as it is based in that state.
"Surely it can't be too difficult for 'The Terminator' to terminate Punternet and that's what I am demanding that he does."
She said the website was a "very sinister development" in the trade and exploitation of women and allows guests to compare and rate services in the same way as they would a restaurant, a hotel or a holiday.

Wait a mo, that sounds familiar, isn’t there a British web site that encourages “punters” to rate their doctors as they would a restaurant or a holiday?
Oh yes its “crispy” Bacon’s “I want Great care.org”.


No gun no money 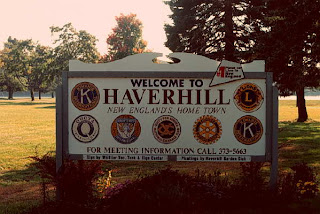 Today’s Numpty is Adam Alsarabi who went into a convenience store in Haverhill Mass; to rob it, the clerk demanded to see his gun and Alasarbi ran off.
And was later caught in the woods by police. No gun was found on him.
He pleaded not guilty Friday in Haverhill District Court to trespassing, resisting arrest and attempting to commit a crime.
It's unclear if Alsarabi has hired an attorney.

Obviously wasn’t a boy scout then.
USA too dear, even for illegal’s 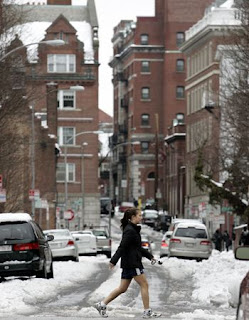 Police in Framingham, Mass., say an illegal immigrant from Guatemala entered a police station, told officers he had stolen another man's identity and asked to be deported because he could no longer make ends meet in America.
Police tell The Metro West Daily News they arrested 29-year-old Carlos Boc after he confessed Saturday night.
Lt. Paul Shastany says Boc told police he wanted to return to Guatemala but can't afford a ticket. He told police he has no job or money and is worried about surviving the winter. He told police he came to the U.S. 13 years ago.
A not guilty plea was entered on Boc's behalf Monday at his arraignment in Framingham District Court on charges including identity fraud.
A home number for Boc could not immediately be found.

But at least he will have a cell and three a day for the winter (if found guilty of course).

80 year old Ralph Needs' problems started Sept. 20. He fell asleep about 8:30 p.m. while watching TV in his bedroom and awoke to find two men standing over his bed.
They'd broken a sliding-glass door to get in and, for some reason, thought he had a lot of money.
For three hours, he was pistol-whipped, tormented and threatened with death.
He doesn't know why he was picked on. Perhaps, he said, it was the new truck in the driveway of his Bixby Road home.
"I don't have a real explanation. It may have given an appearance of money," Needs said this week.
The men eventually took the truck, a computer and credit cards.
Four days later, Needs was shot in his right pinkie and thumb. His eldest son, Steve, was trying to teach Needs how to defend himself with a gun. As Steve loaded the 9 mm pistol, it went off.

And finally:
Load of hot air 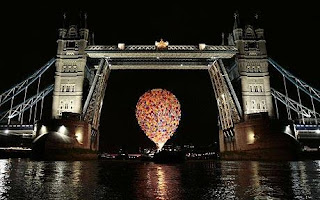 In what is claimed to be a new aeronautical feat, more than 500 mini balloons were woven together to create the contraption which sailed through the famous bridge.
The mini balloons, stitched together with 18 miles of thread, made their way upstream from Wapping aided by a tug boat to keep them on course.
The event was staged to mark the launch of the latest movie offering from Disney-Pixar.
UP is a comedy adventure about 78-year-old balloon salesman Carl Fredricksen who ties thousands of balloons to his house and flies away to the wilds of South America.
The premiere will be on Sunday at the British Film Institute (BFI) on London's Southbank.
The film will be in cinemas next Friday.

Well done Boris, I presume they had permission from the Mayor’s office.