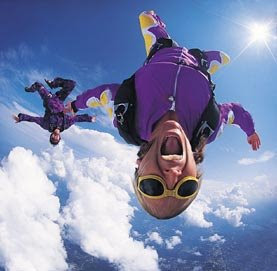 Back to “normal” today.

James Boole, a skydiver, has spoken of how he fell 6,000ft without opening his parachute and lived.

But despite suffering multiple injuries, he was rescued and flown home to Britain in a body brace.

Mr Boole, who has one child, now describes himself as "the luckiest man in the world".
The accident happened while he was filming another skydiver performing a jump onto a mountain side for a television documentary.

As he plunged at 100mph, he was meant to open his parachute following a signal from the other man.

But because of a mix-up, he pulled the cord with only a few seconds to spare.
Landing was like being "hit by a speeding truck", he said.

He reportedly broke his back, cracked a rib, chipped several teeth and bruised a lung.
"I was screaming in pain, coughing up blood," he told the Sun.

Mr Boole, a mechanical engineer by training, has been parachuting for 12 years and has completed more than 2,000 jumps.

As an aerial cameraman, his work has been featured on the BBC's Top Gear programme.
The video is worth a watch the last bit is the best.

Mind you I have never seen the sense in jumping out of a perfectly good aeroplane. 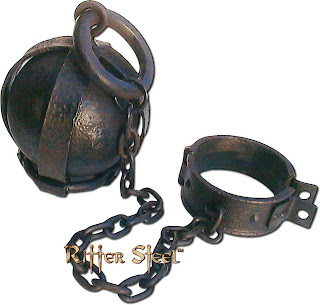 Parents struggling to get their kids to revise in the run-up to exams can now keep them at their desk using a ball and chain that only unlocks when they have studied for long enough.

Concerned mums and dads set the desired study time on the Study Ball and attach it to their child's ankle.

A red digital display counts down the "Study Time Left" and the device beeps and unlocks when the time expires.

The prison-style device weighs 9.5 kg (21 pounds), making it difficult to move while wearing it.
It cannot be locked for more than four hours and comes with a safety key that allows the manacle to be opened at anytime.

The ball and chain costs £75 and is sold online at curiosite.com.

I’d do away with the timer myself, but there will be the usual “abuse” and “human rights” outcry, but the best bit is they call it the “study ball”. 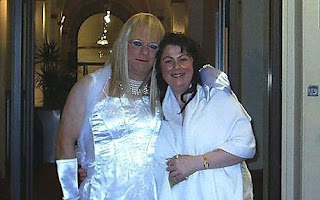 The 51-year old wanted to keep his new in-laws happy so he sported his dark grey morning suit after tying the knot as Ian with fiancee Lisa, 42.
But after Lisa's close relatives left after the nuptials, Ian put on a white wedding dress and blonde wig to cut the cake as "Susan".
He sported morning wear for the registry office ceremony in accordance with tradition as Lisa's proud father walked her down the aisle and her mother and elderly relatives look on.
But just before guests arrived at the reception to tuck into a buffet at a nearby hotel Ian nipped home and put on a white bridal gown he had bought on Ebay.
Their one hundred guests roared with approval as the two "brides" cut their two wedding cakes - one saying "Ian and Lisa" and the other saying "Susan and Lisa."

Whatever floats your boat I suppose? 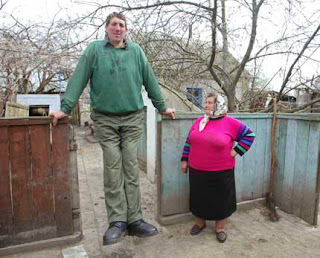 Taller men earn more money A six foot tall man could expect 1.5 per cent more than a workmate who is five foot 10, according to the new study
The study, from the University of Sydney and the Australian National University, Canberra, compared the pay grades of 20,000 Australians with other data such as weight and height.
They found that size matters when it came to earning money, although the "pay premium" was greater for men than women.
Andrew Leigh, an ANU economist and one of the authors of the report, said: "We found that taller people earn more, with the effect being strongest for men. For example, the average man in our sample is five feet ten inches tall. Our estimates suggest that if he were six feet tall, he would earn another 1.5 per cent, or around $950 (£470) per year.
"The wage gain from another two inches is approximately equal to one more year of labour market experience. However, we found that the effect of height on women's wages was smaller than for men, and not statistically significant."
Women would need an extra four inches to get a similar boost in earnings over their colleagues.
Men have always known that size matters. 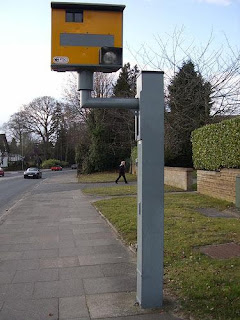 Here’s one to annoy you Speed camera makes £1 million in five months A speed camera set up to catch motorists racing through roadworks in London issued £1m worth of tickets in just five months of operation.

The camera, which was fixed to monitor cars on the busy A316 Country Way, in Hanworth, South-West London, was catching motorists at the rate of more than 100 every day and ended up ensnaring 16,213 speeders.
With a normal speeding offence resulting in a £60 fine and 3 points it means the camera site was responsible for £973,000 worth of fines and almost 50,000 penalty points.
Transport bosses put the cameras up to police a temporary 30mph limit on the road, which usually has a 50mph restriction, and is used by thousands coming into and out of the capital via the M3.
Works at the site included improving the signage and road markings, putting in more street lighting as well as waterproofing and resurfacing the viaduct.

Well it obviously didn’t work did it? 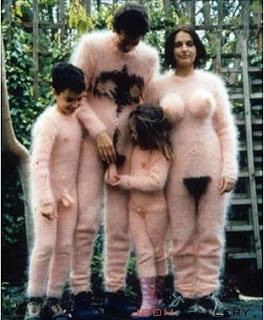 One we can all take part in Awkward Family Photos blog becomes web sensation Awkward Family Photos, a new website that allows readers to share embarrassing family images, has become an overnight success.
The blog was only established this month but is already attracting more than two million visitors a day, with major publishers lining up to offer book deals.
The premise of the site – gauche family photos, wittily captioned – has hit a nerve with people delighted to discover that the eccentricities of their own relatives are far from unique.
Among the most popular images so far is a soft focus shot of a pregnant woman and her partner embracing as they gaze sweetly at the camera. Both are shirtless.
In another, titled "The Choker", a smiling son grips his mother tightly around the neck while his father – wearing a dog collar and shorts – looks on. The caption reads: "This is what happens when your male role model is both a priest and a gym teacher."
Now there’s an idea to up the visitor stats.


“My mind rebels at stagnation. Give me problems, give me work, give me the most abstruse cryptogram, or the most intricate analysis, and I am in my own proper atmosphere. But I abhor the dull routine of existence. I crave for mental exaltation.”-Sir Arthur Conan Doyle