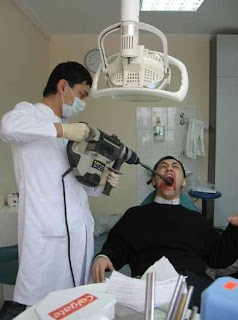 Just managed to sit down to write this, been a hell of a day, had to go to the dentist, who were an hour late, then I had to sort out some “official” pillocks who couldn’t find their arse in a dark room if they had a torch.

So I won’t be posting on the Politico blog today.

And just a few snippets on this one.

BBC NEWS A parent is jailed for their child's truancy once a fortnight every school term in England and Wales, analysis of court statistics shows.

The good old Gov has done their usual U-Turn-from this-The Labour government has made a priority of tackling truancy, introducing increasingly severe penalties.

To this-The government now says that it prefers to look at overall absence, including absences that have been authorised by schools, rather than to focus on truancy. On this measure, there has been an improvement.

Number crunchers of the world unite!


Women's traits 'written on face' -BBC NEWS it seems that a woman's personality traits may be "written all over her face", research has suggested.

The Glasgow University and New Scientist study examined whether self-assessed personality characteristics could be identified from appearance.

Dr Jenkins said “Overall the data is fascinating," he said. "It pushes the envelope in that we are looking at subtle aspects of psychological make-up.

"It's possible that there is some correlation between appearance and personality because both are influenced by our genetic make-up."


After my drawn out visit to the dentist, this caught my eye- Millions 'opt for DIY dentistry' Millions of people in England have resorted to DIY dentistry, a survey by consumer magazine Which? suggests.

The poll, of 2,631 adults, found 8% had tried to fix their own dental problems - and a similar number knew somebody who had tried.


Of those who admitted trying the DIY approach, one in four had tried to pull out a tooth using pliers.

Some 30% of DIY dentists had tried to whiten their teeth with household cleaning products.
Other DIY procedures people admitted to included:
• Using household glue to stick down a filling or crown (11%)
• Popping an ulcer with a pin (19%)
• Trying to mend or alter dentures (8%)
• Trying to stick down a loose filling with chewing gum (6%)

Our Boris loses his cool The Evening Standard says committee members were told by Mr Vaz that "the mayor used the F-word ten times".
Not so says Mr Johnson's aides he only used strong language “once or twice”

“This is a confusing and uncertain period, when a thousand wise words can go completely unnoticed, and one thoughtless word can provoke an utterly nonsensical furore.” Vaclav Havel