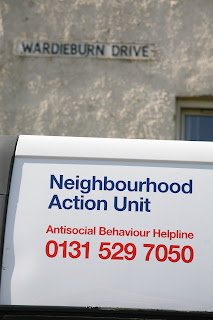 This part of the blog seems to be becoming a fixture; today’s item is regarding the death of Fiona Pilkington, 38, and her daughter Francecca Hardwick, 18, who burned to death in a car after complaining of years of harassment by youths in their Leicestershire home.

It seems that Gord has decided to declare war on families from hell, by promising tough action on problem families who terrorise their neighbours as he delivers his final conference speech before the general election.

In his keynote speech to a Brighton conference under the banner "Operation Fightback", the Prime Minister will announce £36 million of additional funding to roll out "tough love" Family Intervention Projects (FIPs) to all 50,000 of the country's most difficult families over the coming five years.

Mr Brown will say he wants to see a "step change" so that all of those needing it - estimated to be 50,000 families with 100,000 children across the country - will go through a project by the end of the next Parliament.


So that won’t happen then.

And talking about Gord (don’t we all). 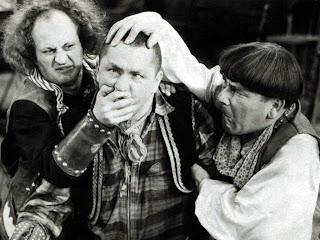 It is rumoured that he will accept the challenge to a televised debate with David Cameron and Nick Clegg in the upcoming general election campaign.
Reports suggest the Prime Minister is actively considering agreeing to an unprecedented TV debate and may announce his decision in his keynotes speech to conference.
Official sources were silent on the issue of a debate. But, it is understood that no final decision has yet been taken by Mr Brown.
A televised debate between the leaders of the three major parties has never previously taken place during a UK general election, often because the front runner in any contest fears losing ground through a poor on-screen performance.
Reminds me of the three stooges; wonder who will be Larry, Curly or Mo?
B of a crash 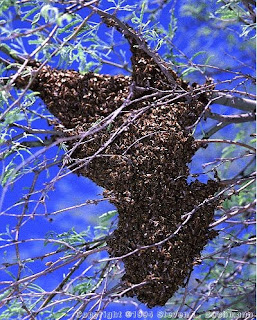 ANKARA, Turkey - A van carrying beehives crashed into a truck on Monday, and huge swarms of bees broke free and stung the injured and rescue workers at the scene.
In the end, about 20 people were taken to hospitals, six of them injured in the crash and the rest rescue workers who were stung by the bees, said the state-run Anatolia news agency.
One of the crash victims later died, but it was not immediately known if he had been killed by the impact of the accident or the insect attacks, said local Gov. Ahmet Altiparmak.
The rescue workers - including local beekeepers summoned to the scene - used hoses, blankets and rags to try to ward off the bees. But it took about an hour for them to remove the crash victims from the chaotic scene, Anatolia said.
The van hit the stationary truck on a road near the Mediterranean resort of Marmaris in southwestern Turkey, injuring four people in the van and two in the truck, Anatolia said. The impact burst open the bee hives in the van.
The bees swarmed over the injured and police, medics and fire-fighters who responded to the accident, forcing authorities to seek the help of about 50 beekeepers in the area.
As the crash victims waited for help, bees swarmed over them, Anatolia said.
In a similar accident in 2006, bees repeatedly stung the two drivers of a truck that carried beehives and overturned on a road in central Turkey. Police, fire-fighters and journalists who rushed to the scene also were attacked.

No shortage of Bees in Turkey then.
Super Scooby 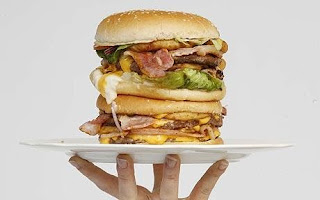 Britain's most fattening burger, the Super Scooby, has gone on sale, containing more than a day's recommended total calories.
The Super Scooby is loaded with four 1/4lb beef burgers, eight rashers of bacon, eight slices of cheese, 12 onion rings, heaps of salad and three sauces. At 2,645 calories, it exceeds the daily recommended limit for men by 145 calories.
The burger stands at six inches tall, has a circumference of 13 inches, and weighs in at 1.5kg – the same as a family-sized roast chicken. It also comes with an extra side portion of chips.
The Jolly Fryer takeaway in Filton, Bristol, are offering customers the meal for £10 – and provide a free can of diet coke for anyone who can finish it in one sitting.
Not surprisingly, the challenge of "beating the beast" has so far been unsuccessful.
Among its fans is Luigi Armato, 22, who has eaten a Super Scooby once a week since its creation earlier this year.

Whatever, but it is a bit pathetic compared to this. 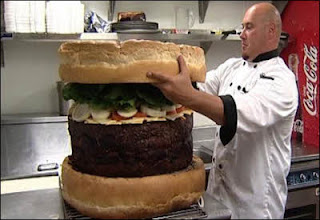 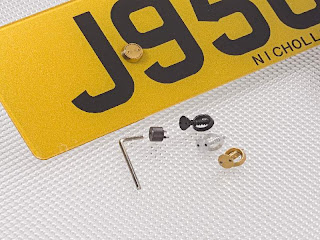 Bank robber James Snell has been caught by police because of the personalised number plate on his BMW car that he used to stake out his target in Cardiff.
Snell drove his car with the registration "J4MES" to set up the £100,000 raid on a Halifax branch.
His gang of four robbers was caught when a witness remembered admiring the distinctive plate on the blue BMW - and gave details to police.
Snell, 26, and his brother Wayne, 34, were traced to their hideaway and found red-handed with more than £30,000 of the cash in bank-notes.
The number plate blunder was revealed when Wayne was jailed for eight years for robbery. James will be sentenced later.
The gang decided to use heavy metal drain covers to smash their way into a Halifax branch in Roath, Cardiff.
They set off in James Snell's BMW to plan the bank heist - including watching the branch and planning their getaway.
But Cardiff Crown Court heard they were spotted by a passer-by who remembered the J4MES number plate because it stood out.
"A witness saw a passenger lean out, lift a drain cover from the road and the car drove off," Prosecutor Tim Evans said.
"Lee Norville, who works for the council's highways department, later identified one of the two covers used to smash the windows at a branch of Halifax as coming from that drain. It is clear their arrogance contributed to their undoing."

And finally:
No change there then 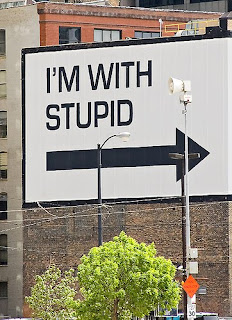 Ask a Stupid Question Day comes to Britain’s schools, encouraging pupils to ask teachers the daftest things they can think of.
The tradition dates back to the 1980s in America, and took place on 28 September or the last day of the school year. Pupils are encouraged to ask their teachers ridiculous questions.
Now British children are to get the same opportunity.

Here’s a stupid question: why do we have to keep taking on American “traditions”, such as Halloween and the like?