Misty, murky and miserable at the Castle this morn, the elbow has returned to normal size, has a bruise as big as Greenland and still hurts.
The study is still devoid of any ex adding machines and his Maj is still bringing me worms.


A smidge late this Monday, had to go down to Tesco on the stale bread, gruel and Pussy food run.


According to Wolfgang Schäuble ‘Blighty will join the euro before long’ 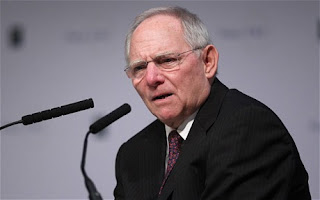 Germany’s finance minister reckons despite the current crisis in the eurozone, the euro will ultimately emerge as the common currency of the entire European Union. He said he “respects” Britain’s decision to keep the pound, but insisted that the survival and eventual stabilisation of the euro will convince non-members to join the currency club. “This may happen more quickly than some people in the British Isles currently believe,” he added.

Bollocks, and don’t even think about it Prime Monster.

And our own Piss Poor Policy Millionaires Club Coalition 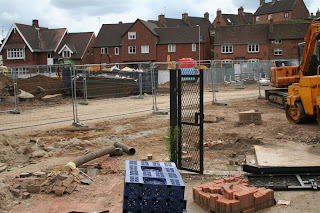 Has come up with a stonking plan to fuck up the economy even more-Plans to allow first-time buyers of new homes to borrow up to 95% of the value, with the government underwriting part of the risk, are to be unveiled.
They are part of a scheme to deal with an acute shortage of affordable homes, set to be revealed by David Cameron.
The initiative, for England only, will begin in July and aims to build 16,000 new homes and create up to 32,000 jobs.
It includes a £400m fund which will help to kick-start schemes which are ready but lack necessary finance.
The government call the plans "radical" and a "step change" in their approach. However, Labour say ministers have failed to deliver on housing.

Err; isn’t lending money to people who default on mortgages what got us in this pile of crap in the first place...and for ‘the Government’ read ‘the Taxpayer’. A new documentary has discovered that the Queen had two cousins who were hidden away in a mental asylum for most of their lives and had no contact with their family.
A channel 4 film will portray the Royal Family as callous and neglectful in their treatment of five "hidden cousins" of the Queen who were locked away in the same mental asylum for decades.

At the heart of The Queen's Hidden Cousins is the emotional story of two royal relatives, Katherine and Nerissa BowesLyon, nieces of the Queen Mother, who were never visited by the Royal Family nor invited to any royal event at Buckingham Palace.

Indeed, the Bowes-Lyon family, into which the Queen Mother was born, announced in Burke's Peerage that Nerissa had "died in 1940", even though she was alive in the asylum; the same publication also published that Katherine had died. The family would later put these errors down to "vagueness".

Nerissa did die in 1986 but her sister Katherine is still alive in a Surrey nursing home. She is 85, the same age as the Queen.
The death of Nerissa brought the shocking revelation that not only was her sister Katherine in Royal Earlswood but three sisters from the Fanes family lived at the hospital. They were connected to the Bowes-Lyons on mother Fenella's side.
Nerissa now has a proper headstone, although the rumours are that the "grave was dug deep enough for two". The eventual gravestone was paid for by their niece Lady Elizabeth Anson.

Katherine was moved to Ketwin House in Surrey where patients were charged only £770 a year at the time of its closing after allegations of physical abuse.

She is now resident in another nursing home in Surrey where "she has been taken on holidays around Britain by the staff".

To this day, however, she has never been visited by a member of the Royal Family.

Neither Buckingham Palace nor Glamis Castle wished to contribute to the Channel 4 programme.

Why did I come in here? 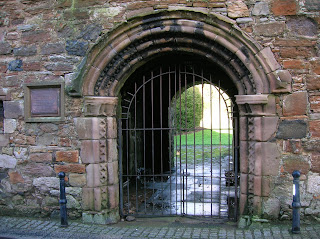 Ever walked into a room to get something only to forget why you went there in the first place?
New research from University of Notre Dame psychology professor Gabriel Radvansky suggests that passing through doorways is the cause of these memory lapses.
"Entering or exiting through a doorway serves as an 'event boundary' in the mind, which separates episodes of activity and files them away," Radvansky said in a statement. "Recalling the decision or activity that was made in a different room is difficult because it has been compartmentalized."
The study was published recently in the Quarterly Journal of Experimental Psychology.

Oh good; and I thought it was just the onset of old fartship....

Over in the land of odd spelling

The sprawling pile of hundreds of thousands of tires isn't easy to spot from the ground, sitting in a rural South Carolina clearing accessible by only a circuitous dirt path that winds through thick patches of trees. No one knows how all those tires got there, or when.
But, Calhoun County Council Chairman David Summers says of this giant rubber menace, "You can see it from space."
Authorities have charged one person in connection with the mess of roughly 250,000 tires, which covers more than 50 acres on satellite images. And now a Florida company is helping haul it all away.
Litter control officer Boyce Till said he contacted the local sheriff and state health department, which is investigating who had been dumping the tires.
But the worst possible penalty that could be imposed locally is a single $475 ticket for littering.
Records show the property is owned by Michael Keitt Jr. of Far Rockaway, N.Y.

Tricia Johnson, owner of Lee Tire Company, Inc., said a property owner whom she declined to name called her for help hauling off the material. So far, Johnson said between 10 and 15 tractor-trailer loads of tires have been shipped to her Florida facility. There, they will either have oil and steel extracted from them, or they will be shredded and made into tire-derived fuel, which Johnson said burns more cleanly than coal and is used by paper mills.
Johnson said she has waived her usual fee and is charging the property owner only for transportation costs. She hopes to have all 250,000 tires processed by early 2012.


Back over to Welsh Wales 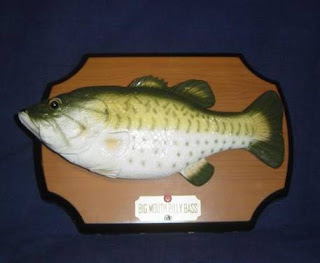 Kurt Price was delighted with the huge fish he caught and ate – until he realised it would have been a record-breaker.
Kurt, 25, reeled in the monster sea bass on a weekend trip to Tenby, south-west Wales. It was only after he had cooked and eaten it that he researched the record books and realised his catch would have been the biggest of its kind. The record for a shore-caught sea bass is 19lb 11oz. Angling experts who have seen a picture of Kurt’s catch believe it was bigger than 20lb. But Kurt, of Cwmbran, Monmouthshire, cannot claim the record because he failed to weigh the fish – and has eaten the evidence. Kurt said the fish was very tasty but added: “I’m gutted.”

That’s it: I’m orf to launch a robot into the moat.


And today’s thought: Fishermen fall for it, hook, line and sinker.