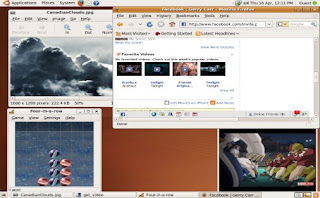 No it’s not an African dish, it’s a free operating system, which I am sure all you savy “interneters” know about.

Well, because of my recent battle with Microsoft XP, I purchased another laptop on Ebay for the princely sum of £85: it needed a HDD and a CD drive which I had already.

And I am using it now-3.06ghz cpu, 1gb of ram, and it goes like stink and is stable (fingers crossed).

I decided to try Ubuntu on the old one, I downloaded the iso image, burned it onto a CD and installed it, quite impressed so far, it found my internet (mozilla) connection easily, and set up my email quickly, it comes with Open office built in, which is compatible with MS Office.

And it also updated itself to the latest version automatically.

It will take a bit of time to get used to the desktop and applications, but I will report back if anyone is interested.

To sum up, so far Ubuntu is the dog’s bollocks, but time will tell.


"Who's General Failure and why's he reading my disk?" Anon