POVERTY, BENEFITS, THE UNDERCLASS AND THE GOVERNMENT 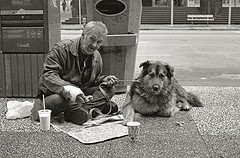 Long title not so long blog.

First let’s get the Psychotics out of the way.

Gordon Brown Trousers thinks he has saved the world, and Mugabe thinks that the Cholera epidemic is over.

Anyway back to the title- Question Time watch it, because it is very enlightening.

I watched the above program last night, as usual, but while watching it I had a “revelation”.

There were the expected questions, such as “is this a good time to “force” people on benefits into work” and the usual answers-yes and no from different panellists. Apart from the labour MP who was all in favour of it, and vomited the usual bollocks such as “support” and “preparing”, “pride” and “self esteem”.
How you prepare for a job which doesn’t exist I don’t know, because if we ever come out of this Recession the Country is going to be a very different place. And the Conservative “lady” was also in favour. (Remember that at the next election).

But the “revelation” was that all these people considered that people on benefits were in poverty and an “underclass” and that made me think.

If people on benefits are in poverty, the poverty is imposed on them by the level of benefits given, which means that the Government is responsible for that poverty.

And it is responsible because the levels of benefits are so low.

The Govs’ solution to get people out of poverty is to remove them from the benefits system and make them “ready for work” while still paying below the poverty-line benefits.

Now, I may only have one brain cell but isn’t this a bit strange?

I also watched This Week, afterwards, which is a programme I don’t usually watch because I think that the “panellists” are Pillocks and over-inflated knobheads.

But the same theme was “discussed”-benefits and the Underclass.

All present agreed that the “Benefit Reform Bill” was a wonderful idea, they even dragged in John Bird, the founder of “The Big Issue” who has plenty of money, and also agreed that the people on benefits should “pay” for those benefits, I wonder if his opinion would be the same if he hadn't become "successful"? And said things such as “People on welfare are caught in an invidious situation, because they don’t have to provide for themselves the Government becomes the breadwinner and they lose the incentive to work”.
Why is it that people with money, jobs and a bit of power, such as Mr Bird suddenly become “reformers” and spout the “PC speak” that is rife on this Island of ours instead of actually remembering what life is like for the “Underclass”?

Watch it, quite revealing as well.

My point to all this is that the Government has perpetrated Poverty by paying sub poverty benefits, has ignored the “underclass” until the financial situation which they got us into kicked them in the Bollocks, and, suddenly decides to act in their usual half arsed way when the possibility of employment is about as rare as rocking horse shit.

A bit longer than I thought, maybe I am misguided but that is the state of play as I see it.

And just to end on a brighter note-I have waited 40 years for this, the QUO has released a Christmas song, they have learned a new chord (Or maybe not) and plunged into the quagmire that is Yule Tide.

Good luck to Mr Rossi and Mr Parfitt, and lets hope there are no bloody ring tones in the wings.