All piss and wind U-Turn Cam: Sixty per cent law: Moose has a swing: Tomato wine: No fun in the Big Apple: and an ‘ere-‘ere De-daw.

More than a lot of solar stuff, nary an iota of atmospheric movement and even less wet stuff at the Castle this morn, the liquid metal in the gauge has gorn all Olympic and is trying to reach the gold gong at the top of the tube and I managed to do some serious vandalism in the garden yester aftermorn and now I have another load for the “recycling centre”.

And the formatting thingy on blogger seems to have a mind of its own today.

And as Blighty slowly sinks into the economic sewer 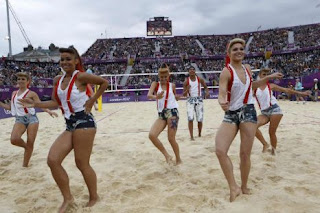 Our fearless bleader has more important things on his mind than actually doing his fucking job because the noise from the beach volleyball is keeping him awake.
The Prime Monster reckons that 'It's all very amusing for five minutes until you try to get the children to sleep. They have Moves like Jagger every sort of ten minutes. There are particular DJs, who do particular things,'
Aaron Copeland's 1942 classic Fanfare for the Common Man is another favourite on the loop of songs being played at Horse Guards Parade, along with Maroon 5 and Christina Aguilera hit song Moves like Jagger an aide noted.
And Dave has had a pop at Michael Phelps and Ryan Lochte because they have been peeing in the Olympic swimming pool before their swims he weighed in saying: 'I was quite surprised by that. It is not OK to pee in the pool.'

Yeah right Knob Head; never had a slash in the swimming pool yourself-eh...

Dahn in the West-est County 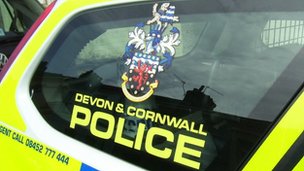 About 40% of crimes reported to a police force in the most recent year were not investigated, figures reveal.
Of 91,532 incidents reported to Devon and Cornwall Police during the 2011/12 financial year, 36,575 were not investigated after initial assessment.
The Freedom of Information (FOI) figures showed that investigations shelved by officers included about 11,000 reports of criminal damage, 4,000 thefts from vehicles and 3,700 burglaries.
The rate was a rise from the previous year's figure of about 34% of some 86,000 cases not going forward.
The force said that all crimes reported to them "received an appropriate level of investigation".
The Police Federation claimed it showed that cuts were affecting policing and the force was failing crime victims.

Or maybe it’s because they can’t be bothered to get out of their comfortable BMWs and do what they are paid for.....

Police were called when residents spotted a moose tangled in chains outside a home in Ogden, about 40 miles north of Salt Lake City in Utah.

Utah deputy Lane Findlay was told it would take at least an hour for wildlife officers to arrive, so tried to free the distressed and bleeding animal himself.

He handed his mobile phone to onlookers and asked them to video the scene, saying: "If something happens to me, give this to my wife."

The tangled swing fell to the ground and the moose trotted to a nearby bucket of water and began drinking, then collapsed from exhaustion.

Sgt Findlay spent an hour spraying down the animal with a hose before wildlife officers arrived to treat the animal.

What does he want-a bleedin medal....


Up a bit to the last pink bit on the map 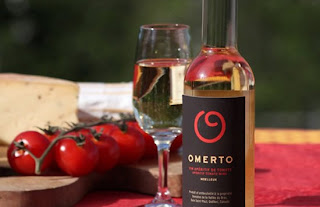 Pascal Miche, a wine maker from Quebec, Canada, uses tomatoes to create an unusual yet increasingly popular vintage. His secret lies in a four-generations-old Belgian family recipe.
A former pork butcher, Pascal Miche moved from Belgium to Canada’s Quebec province, seven years ago and decided to go through with his idea of commercializing his grandfather’s precious wine, made according to an old recipe. He finally kick started his business in 2009, planted his “vineyard” and began making tomato wine.
For his Omerto wine, named after his grandfather, Omer, he uses subarctic, yellow and black cherry tomatoes, chosen for their bountiful yield and gustative properties. According to sommeliers, Omerto tomato wine has a ”hint of fruit, zesty aspects, familiar in cakes… a bit honey-sweet, which could be very good with deserts and spicy foods,” and is often compared to a sweet Pineau des Charentes.
Who says there are no wine snobs....?

Dahn a fair way to the Big Apple 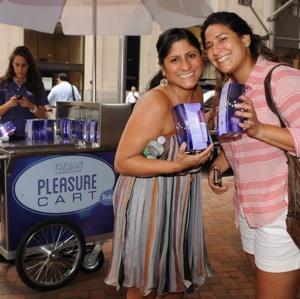 City officials pulled the plug on a vibrator giveaway by the Trojan condom company yesterday, disappointing potentially thousands of pleasure-seeking women who hoped to get their hands on some no-cost sex toys.
“I’m 57 years old. I should be able to get a vibrator!” declared Linda Postell, who was among hundreds of women (and men!) waiting in the heat on Pearl Street only to be left unsatisfied. “I have a problem with the smoking ban, and the soda ban — and now this!”
Trojan sent tingles of excitement across the city when it announced the giveaway of some 10,000 vibrating sex toys from hot-dog-style pushcarts.
Trojan began by handing out about 400 free vibrators without incident on Sixth Avenue in Rockefeller Centre between 11 a.m. and noon.
The giveaways were scheduled to start at 4 p.m. in the Flatiron District and near the South Street Seaport.
As carts arrived at each location, nearly 300 women and quite a number of guys queued up.
But instead of climaxing in a successful giveaway, the promotion was prematurely interrupted by City Hall, which sent a dark-suited representative to put the squeeze on Trojan’s “Pleasure Carts.”
The spoilsport, who declined to identify himself, told Trojan’s reps at the Flatiron location that they had to shut down because of the size of the crowd that had gathered.

Ah, the old too many people enjoying themselves ploy....

East more than a lot of non Imperial units 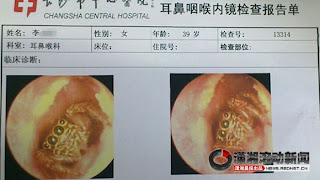 A woman who checked into China's Changsha Central Hospital Wednesday (Aug. 8) with an itchy ear learned she had a small spider dwelling in her ear canal, according to news reports. It had crawled inside five days earlier while she slept.
At the hospital, pictures of the patient's ear canal revealed a stocky, hairy, four-eyed arachnid peering out at the camera, much to doctors' and the patient's surprise.
Amid concerns that disturbing the spider would cause it to "instinctively drill its barbs deeper, scratching the ear canal," local news sources reported that doctors succeeded in removing the creature by pouring saline solution into the ear canal and flushing it out.
As the spider's outstretched foot emerged from her ear, the patient, identified only as "Ms. Lee," reportedly "almost started crying


I’d have been running round the ceiling by then...


That’s it: I’m orf to buy a Meshworm 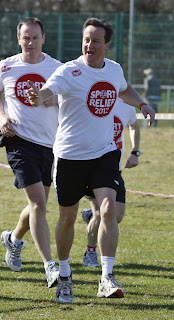