As twenty twelve plus one starts orf something very odd is happening at the Castle this morn-the skywater has evaporated, the atmospheric movement has dissipated, the liquid metal in the lack of warm gauge has risen a number or two; and believe it or not but Dawn’s crack is visible for the first time in more than a couple of weeks. 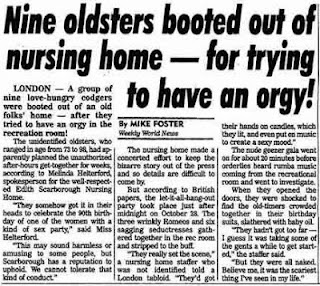 By 2020 the number of 60 to 64 year-olds on jobseekers’ allowance will rise from 19,000 to 39,000 by 2020.
And an additional 75,000 older people will move onto jobseekers’ allowance, the report said.
The number in the old fart age group receiving incapacity benefit or employment and support allowance will rise from 280,000 to 375,000.
Allegedly Jobcentres are preparing for a surge in unemployed older people who will need extra training in how to write CVs, apply for work online, and deal confidently with employers who they fear “routinely” discriminate against older workers.
A study by the Department for Work and Pensions predicted that the number of 60-64 year olds on jobseekers allowance and incapacity benefits will rise to more than 400,000 by 2020.
The research mapped the impact of the rise in the population of older people who will be expected to continue working as a result of the abolition of the default retirement age, changes to benefits, and increases to the state pension age.
It found that the biggest obstacle the over 60s will face to finding work is “a lack of modern job search skills”, especially their limited experience of looking for work online.
Many also have “unrealistic wage expectations”, “outdated qualifications” and “narrow” views about the types of job they could do. 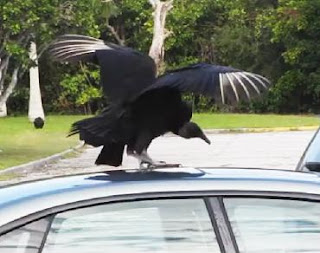 Everglades’s visitors are being offered ‘anti-vulture kits’ to defend against birds with a taste for car parts.
Over the last few years, staff members at Everglades National Park have experimented with ways to scare off flocks of vandals that lurk in parking lots every winter, sporadically defacing cars, trucks and boat trailers.
They’ve tried yelling at them, squirting them with water, even dangling dead ones upside down in trees.
So this winter, the park is shifting to purely defensive tactics against the big birds, expanding a program that provides visitors at the most trouble-prone sites loaner “anti-vulture kits” consisting of blue plastic tarps and bungee cords.
“It’s recognition on our part that they’re part of the park and we’re the intruders in their world,” said park wildlife biologist Skip Snow. “The vultures are doing what comes naturally.”

And there’s me thinking that cars have always been on the Vulture’s must eat list.


Right a bit to the land of decorators, plumbers and kitchen fitters 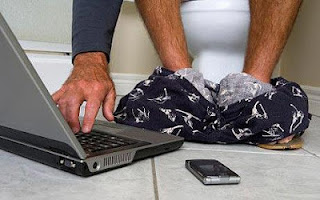 boxing on the box; and failed miserably.

And when the phone rang he picked up the hot iron and put it to his ear, "Trouble was, I got so involved in the boxing that I wasn't really thinking about what I was doing," he said.

"I really don't know how I could make such a silly mistake. But I guess it proves men are not able to multitask as well as many women can."

West again and dahn a fairway﻿ 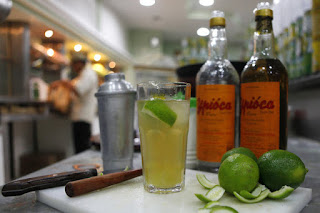 Researchers in Brazil claim to have found a faster way to age the national drink - zap it with gamma radiation for a few minutes rather than let it sit in barrels.
This supercharged version of cachaca, a spirit similar to rum, carries with it no radiation risk, said Valter Artur of the Nuclear Energy Centre at the University of Sao Paolo.
"Tests have shown this cachaca can be consumed right after it is irradiated," Mr Artur was quoted as saying in the Folha de Sao Paulo newspaper.
So far the technique has only been used in university labs.
The gamma rays ionise the cachaca and this speeds up chemical reactions that take place naturally during the ageing process, he explained. 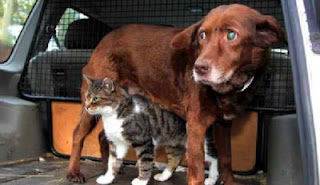 Eight-year-old Terfel kept bumping into things and spent most of his time stuck in his basket after being diagnosed with cataracts.
﻿
﻿
Then owner Judy Godfrey-Brown let a stray cat into her home.
The puss, named Pwditat, walked up to Terfel and led him out of his basket and into the garden. She has been helping him find his way around ever since.
Retired civil servant Judy, 57, of Holyhead, North Wales, said: “I’ve never seen anything like it — most cats and dogs hate each other.
“But Pwditat immediately seemed to know that Terfel is blind.
“She uses her paws to help guide him. They are glued to each other and even sleep together now.”


Probably because someone has glued them together......

That’s it: I’m orf to build a Tardis

And today’s thought
See- we can multitask 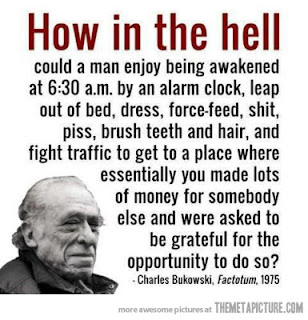