Is the Piss Poor Millionaires Club Cabinet worth it?: Socrates is innocent!: License to print money: Taste of a tear: and Back in the lead.

A smidge cooler at the Castle this morn, the garden needs a good fettle-grass, hedges, borders, pots and wall boxes but it has been too hot to bovver.
The good news is that “they” are threatening vast amounts of sky water dahn ‘ere in ‘Ampshire aftermorn, which means that I may not have to hump the watering can around the grounds and the Honda might return to red instead of yellow. 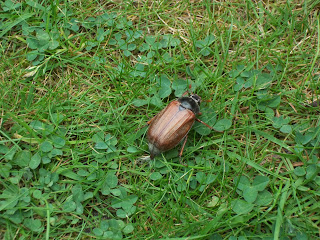 The Torygraph might have shot itself in its blue foot 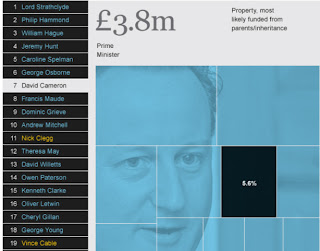 They have published a graphic entitled “the combined wealth of the Cabinet revealed” which as it says lets us know what the rich bastards that sit round the sideboard are currently worth.
Click on this link and you too can see why “we are all in this together” but some of us are just in it while others are sticking together... 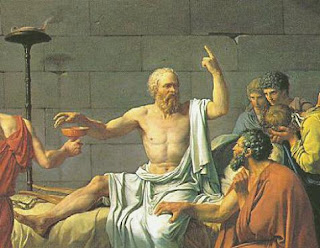 Socrates whose teachings earned him a death sentence in ancient Athens has been acquitted-just.
A panel of 10 US and European judges heard pleas by top Greek and foreign lawyers at the Onassis Foundation in Athens.
Judges then voted on whether he was guilty on the ancient charges of evil-doing, impiety and corrupting the young.
In 399 BC, Socrates was made to die by drinking hemlock poison after being convicted by a jury of hundreds of Athenians. Unrepentant, he had insulted the judges at his trial and cheekily asked to be rewarded for his actions.
The modern judges spared him that dishonour this time, with an even vote -- five guilty and five not guilty, meaning that under ancient Athenian law he was not convicted.
More than 800 people bought tickets for Friday's event, which was also watched online at www.sgt.gr by web users who could cast their verdict.
Organisers said the issues of democracy and free speech raised by Socrates' trial was resonant for global politics in light of recent uprisings and crises.
Organisers said the event was also good for Greece in its current crisis, as it awaits a second general election on June 17 that could determine whether it stays in the eurozone.


Which explains why Greece is so deep in the shit....


East to the land of palm oil and tin 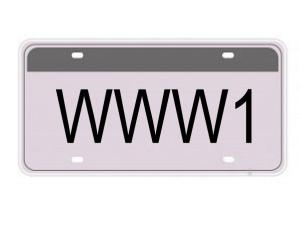 
Surprised it went for so little....

Back in hot and sultry Blighty 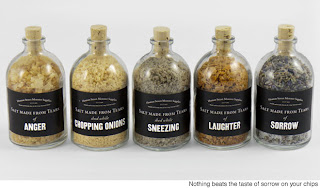 A range of salts said to be collected from crying humans experiencing a range of emotions have gone on sale in London.
The £7 salts - sold by Hoxton Street Monster Supplies - is billed as coming from tears of sorrow, tears shed while sneezing, tears shed while chopping onions, tears of laughter, and tears of anger.

Each salt is said to distinctly different flavour and could certainly add an interesting element to your next dinner party.
A spokesperson said: "Salt Made From Tears” combines centuries-old craft with the freshest human tears which are gently boiled, released into shallow crystallisation tanks, then harvested by hand and finally rinsed in brine.

It's all bollocks of course, the salts are really sea salt from Halen Môn and have been developed in collaboration with Studio Weave. But as a percentage of sales goes towards the Ministry of Stories, which aims to inspire a nation of storytellers, and boost the profits of Hoxton Street Monster Supplies

It’s enough to bring a tear to your eyes...or your wallet.... 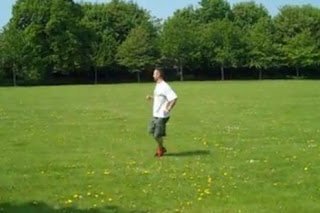 Runner Garret Doherty has become the first Briton to dip below seven minutes running a mile backwards.
The 33-year-old smashed his own British record while defending his title at the UK backwards running championships, beating his nearest rival by over a minute to win in 6min 57sec.
He said: ‘I’m thrilled that I managed to keep hold my title, and I’m chuffed that I’ve beaten my personal best time.’
Mr Doherty got hooked on the bizarre sport three years ago – when he turned around to avoid the sun’s glare while out on a jog.
He said: ‘It’s truly liberating, and there are enormous health benefits. It’s much better for your body than running forwards, as its lower impact.
‘People usually have to do a double take when they see me whizzing past.

That’s it: I’m orf to stop the Meerkats inbreeding.

And today’s thought:
I know I dropped that pound coin somewhere 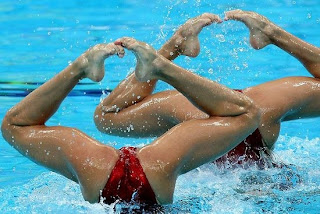