Cloudy, cold and calm at the Castle this morn, I went berserk yestermorn and cleaned the windows and all the wooden floors and rugs with my new super duper all singing all dancing steam cleaner. 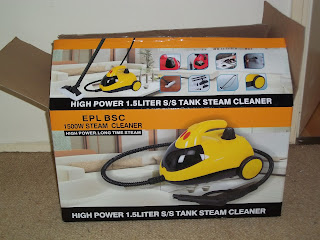 I must admit that I was a whimsy sceptical of the claims made by the manufacturer and the “user manual” is in Chinglish, but I am in love with the 4bar humidifier, it has all sorts of gadgets-floor cleaning, carpet cleaning, window cleaning, oven cleaning, tile cleaning, bath cleaning, sink and tap cleaning and hob cleaning, the only thing it lacks is a widget to get stones out of horses hooves.


And no I am not being paid to write this, I just thought I would let you know, how good it is, and it costs about 20p per hour to run.


And while I was in the grounds doing the outside of the windows I spotted this Azalea which has burst into life in the last day or so. 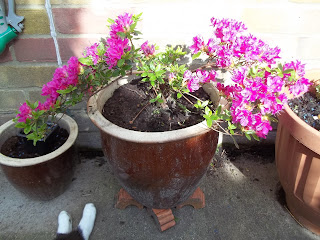 While his Maj looked on in bemusement. 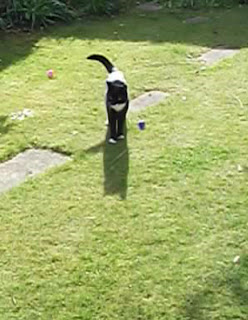 Meanwhile all over privatised Blighty 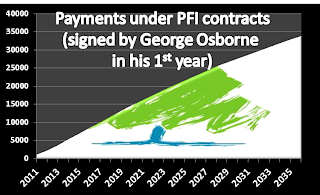 Back in the 90’s the no nuts Tory Government decided that Private Finance Initiatives were the way to go and that leasing ‘Orspitals and other NHS stuff from Private contractors would save us oodles of loot, and then shit for brains Labour reckoned it would be a jolly jape to expand PFI to all and sundry including schools and roads thinking that even more dosh would accumulate in the treasury coffers.
So here are some amounts that PFI has “saved” us.


Taxpayers are committed to pay £229billion for new hospitals, schools and other projects with a capital value of just £56billion, between 1996 and 2010 deals done in the first five years were the worst value for money, costing the Government £7.45 for every pound of private investment raised.


The ratio then fell to £4.03 for every pound raised between 2001 and 2005 and then rose again to £5.43 in the last five years to 2010, possibly because the financial crisis increased the cost of capital for private firms.


In our dear old NHS: charges of £242 to put a padlock on a garden gate at a trust in North Staffordshire, £466 to replace a light fitting and £75 for an air freshener in Cumbria and £15,000 to “install a laundry door following feasibility study” at a trust in Salisbury have been made.


Other charges include £8,450 to install an “additional dishwasher” for a NHS trust in Hull, £962 to “supply and fix notice-board” at a trust in Leeds and £26,614 for the “replacement of shower room doors” at the Sussex Partnership Trust.


The Piss Poor Policies Millionaires Club Coalition has agreed 71 new PFI deals since coming to power. Alien reptile in disguise George ( if ignorance was brains I would be a genius) Osborne, the ‘Chancellor of the Exchequer’, is currently working on an overhaul of PFI by finding for a cheaper way of harnessing private sector money to fund public projects.


Allegedly The NHS will pay back more than £70bn on current projections and the annual bill is due to keep rising year-on-year for the next 18 years.


After that contracts start coming to an end although the final payment will not be made until 2049.


And apparently the total cost of about 800 agreements according to the latest select committee is that the estimated cost for the government to get these projects up and running is £64bn, and then £267bn in repayments to private companies over the next 50 years. These figures can be calculated from the list of all public private agreements published by HM Treasury.


East to the land that still glows in the dark 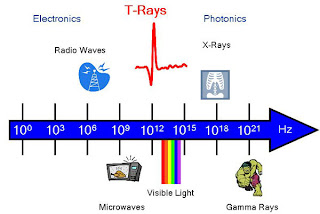 Researchers in Japan have smashed the record for wireless data transmission in the terahertz band, an uncharted part of the electro-magnetic spectrum.
The data rate is 20 times higher than the best commonly used Wi-Fi standard.
As consumers become ever hungrier for high data rates, standard lower-frequency bands have become crowded.
The research, published in Electronics Letters, adds to the idea that this "T-ray" band could offer huge swathes of bandwidth for data transmission.
The band lies between the microwave and far-infrared regions of the spectrum, and is currently completely unregulated by telecommunications agencies.
Despite the name, the band informally makes use of frequencies from about 300 gigahertz (300GHz or about 60 times higher than the current highest Wi-Fi standard) to about 3THz, 10 times higher again.
It is used principally for imaging in research contexts, as terahertz waves penetrate many materials as effectively as X-rays but deposit far less energy and therefore cause less damage.
Until recently, the technology required both to generate and detect these "T-rays" has been too bulky, costly or power-hungry to offer a plausible alternative to existing devices tucked within Smartphone’s or Wi-Fi routers.
At the heart of the team's 1mm-square device is what is known as a resonant tunnelling diode, or RTD.
Tunnelling diodes have the unusual characteristic that the voltage across them can sometimes go down as current is increased.
RTDs are designed such that this process makes the diode "resonate", which in the current work's design means it sprays out waves in the terahertz band. 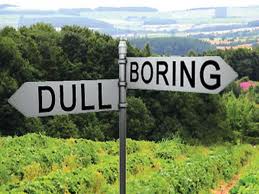 The arrival of the fish van from Aberfeldy qualifies as excitement in Dull. But yesterday the tiny hamlet in Highland Perthshire was abuzz with anticipation, as details emerged of a proposed international alliance with the American town of … Boring.
The plan to forge formal links between the two communities saddled with the world’s least inspiring names was suggested by Perthshire resident Elizabeth Leighton after she stumbled upon the Oregon town of Boring during a cycling holiday.
Her proposal was put before Dull and Weem community council, which represents the 40-strong population, and an approach to establish formal cultural and friendship links between the two communities is now being pursued.
Thomas Pringle, the secretary of the community council, said yesterday that it was fantastic news. “It’s certainly the talk of Dull. I think most of the folk who know about it are more amused about the idea than anything else,” he said.
“And I’m not quite sure what the reaction will be from drivers if we put up a sign saying ‘Dull twinned with Boring’ when they drive through the village. Most of the cars stop already when they just see the Dull sign.”
Mr Pringle, who works in the oil and gas industry, insisted that, despite its name, Dull has its moments. “We have been known in the past to have some quite nice parties,” he said. “I belong to Aberfeldy and my wife and I moved out here about 18 years ago and we love staying here.
“Dull may be small, but it has a lot of history. The village was supposedly set up by one of the abbots of Iona. There is a suggestion that the monks who established St Andrews originally started here before going on to Dunkeld and then St Andrews.”
He continued: “There’s maybe only a population of about 40 at the moment, but there are two houses being built across the road from me, so it’s expanding. But we don’t have a pub or a shop, although the farmhouse, one of the oldest buildings, used to be an inn at one time.
“We have a fish van that comes on Thursday … and that’s it.”


And according to “experts” 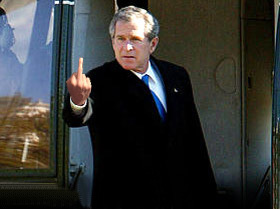 A scientific hypothesis about men, linking ring finger length to exposure to masculine hormones in the womb, lacks genetic evidence, says a new study.
In 1998, British researcher John Manning suggested that foetal exposure to testosterone (and other masculine hormones, or androgens) might explain why some men have notably longer ring fingers than index fingers. The suggestion -- the Manning hypothesis -- has since been used to link index-to-ring finger size-ratios to aggression, autism and other male-dominated ailments or behaviours in more than 500 studies since.
The 2003 study only included 50 people and found a link between a mutation in the androgen receptor gene and a low index-to-ring finger ratio, suggesting a genetic explanation for the uptake of masculine hormones that, in turn, led to longer ring fingers in some men.
But a pair of recent studies has questioned this link -- one finding no link to aggression and one finding no link to the mutation and finger length ratios. So, the new study sets out to repeat the 2003 finding, this time with 152 men.
Overall, the men averaged index fingers that were 95% the size of ring fingers, on both hands. The researchers sampled the study volunteer's androgen receptor genes, finger lengths and their current testosterone levels, looking to repeat the 2003 results.
In other words, size may not matter when it comes to ring fingers.

East again to the land of lots of old people

Motorists in China have been left bemused by this traffic signalling system, where officials installed over 20 sets of lights on a single pole at a crossroad.
The baffling traffic light junction was spotted at a set of crossroads in Chongqing City in China, and looks too confusing for even the most experienced driver.
The system appears to employ well over a dozen sets of conventional traffic lights pointing in all direction with no additional signs to explain anything to frustrated drivers.
Authorities have explained, however, that the lights should be ignored - because they were only installed for decorative purposes and do not direct drivers.

Wonder how many members of the “authorities” went to Eton?


And finally on this very informative blog: 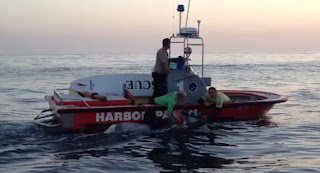 An Arabian horse named William got spooked during a California beachside photo shoot Tuesday and swam a mile out to sea before rescuers got to him and helped him back to shore.
Carpinteria-Summerland Fire Capt. Jay Irwin tells the Santa Barbara News-Press (http://bit.ly/LSknaq ) that the horse's white head looked like a seagull bobbing in the water.
Owner Mindy Peters says the 6-year-old Arabian, whose official name is Heir of Temptation, was part of a photo clinic on the beach when it was spooked by waves and ran off.
Rescue swimmers assisted by the Santa Barbara Harbour Patrol and state parks employees found the horse a mile offshore as darkness fell.

Should have named him Bob....


That’s it: I’m orf to magnetise the sharks in the moat.

And today’s thought:
The gender gap. 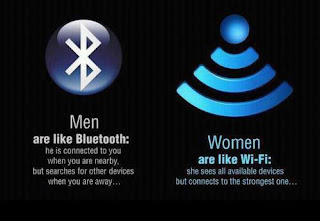