Cold, crisp, crusty and calm at the Castle this morn, the butler is feeding the furnace with fat teenagers like there is no tomorrow and his Maj has discovered the joy of sleeping on my head during the dark thing.

Up in the smoke 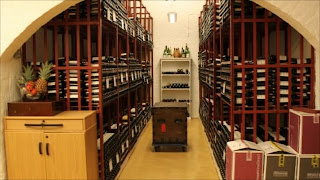 Allegedly The House of Commons has spent £275,000 over the past two years on taxpayer-subsidised wine and champagne.
The Commons wine cellar was filled with 44,000 bottles for MPs and their staff to enjoy in the Palace of Westminster’s unlicensed bars and restaurants.
It includes £28,000 on 1,838 bottles of champagne and £11,100 on 1,470 bottles of sparkling wine.
The wine was bought by the House of Commons catering and retail service, which has received a state subsidy of £11.5m over the past two years.
It amounts to a top-up of 42 per cent - meaning the taxpayer contribution to the wine bill was the equivalent of £115,000, or £176 per MP.
No fewer than 69 different wines were bought, including 47 bottles of the highly-rated Chateau de Fonbel 2003, at a cost of £932; 144 bottles of Joseph Drouhin Cote de Nuits-Villages, costing £1,854; and 204 bottles of Sancerre Domaine de Raimbault, costing £2,455.
The authorities also spent more than £40,000 on 7,300 bottles of sauvignon blanc and £24,000 on 5,000 bottles of Merlot.
The taxpayer subsidy means MPs can enjoy drinks at prices far lower than those found in high street wine bars, with wine from £2.35 a glass.

Which does explain some of the “Pissed” Poor Policies being made law at the tipsy temple of sots.


And up a smidge from the Smoke 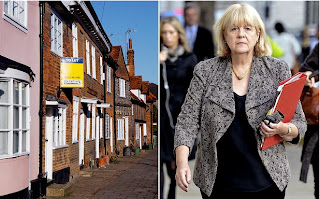 Apparently a Cabinet minister sold her home close to the proposed High Speed 2 rail link just two months before the Government gave the go-ahead to the controversial project.
Cheryl Gillan, the Welsh secretary, sold the house in Amersham, Bucks, last November for £320,000 – just weeks before the Government gave the go-ahead to the £32 billion scheme.
The 17th century terraced house lies 500 yards from the proposed Birmingham to London train route.
Mrs Gillan had been one of the leading opponents to HS2 on the Tories’ benches and had previously threatened to resign if the project was given the green light.
However, after the government signalled its intention to press ahead with the scheme last Tuesday, Gillian emphasised the “good progress” that has been made in mitigating the effects of the new rail route in her constituency with longer tunnels.
A spokesman for the Welsh Secretary confirmed that the house was sold in November last year for 20% below the asking price after being on the market for 18 months.
He said that Mrs Gillan had decided to sell the property because she and her 84-year-old husband have difficulty climbing stairs.


Up a whimsy more 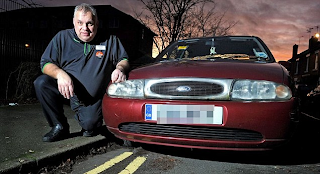 Patrick McCrystal was given a £70 ticket after double yellow lines were painted underneath his parked Ford Fiesta.
Mr McCrystal, from Derby, was further angered when he spotted flecks of yellow paint on his front bumper.
The 49-year-old petrol station worker - who regularly parked between the gaps in the lines - said yesterday: 'I couldn’t believe my eyes. They had extended the existing set of lines underneath my car, and then a warden had slapped a ticket on it.
'When I parked there were double yellows in front of my car, double yellows behind my car, but nothing in between.
'It has been my regular spot for two years and there was nothing to indicate I couldn’t park there.'
Although fine has since been rescinded, Derby City Council admitted the ticket was issued in error.
David Gartside, the council’s head of traffic and transport, said: 'It appears that there was a communication breakdown between our contractors undertaking the lining work and our enforcement officers.


'We apologise for any inconvenience.'


Dahn Unda and right a touch 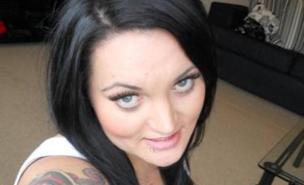 Tina Beznec, 23, placed an ad on the Trade Me website under the title 'YOUR Tattoo on my Bum!!' which offers a 9cm by 9cm square of flesh.
The highest bidder can have anything they like inked on the spot and will receive a framed photo of the finished work. They can even go to the tattoo parlour to watch it being done.
Tina, of Lower Hutt, admitted in her ad that people may think she was 'crazy', but insisted she needed the money.
'Ok so 20% of the auction winnings will go to a Charity of your choice and the rest will go to me, I deserve it, I have been made redundant TWICE over the past year,' she said.
Her idea has attracted plenty of public interest and the bidding in the auction, which ends on January 20th, has already topped the NZ$10,000 (£5,180) reserve price.
Tina also had some suggestions for what the winning bidder could choose to tattoo on her backside, including a business promotion or marriage proposal.

Or how about-“I’m an arsehole”?


Up to whacky baccy land 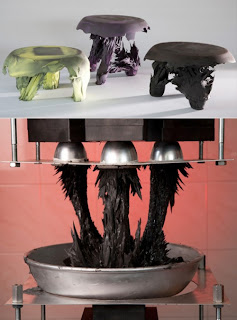 Dutch designer Jólan van der Wiel is making stools by mixing iron filings with molten plastic and creating the legs by "pulling" them up using magnets. When the plastic hardens you've got yourself a stool.

Left a lot and dahn a lot 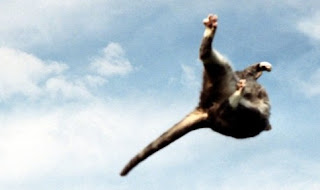 An elderly woman has been left fighting for her life in Argentina after a cat thrown out of a fourth-floor apartment during a heated argument landed on her head, local media reported.
The incident occurred in the Belgrano neighbourhood of Buenos Aires on Saturday when, during the dispute, a man grabbed the family cat and threw it at his wife.
She dodged the feline, which then sailed through an open window and plunged toward the ground, striking the woman, an 85-year-old neighbour.
Police told Argentine media that the victim suffered a fractured skull and was rushed to hospital, where she had to be connected to a ventilator.


The cat's condition is unknown.


Up to the other bit of the Americas 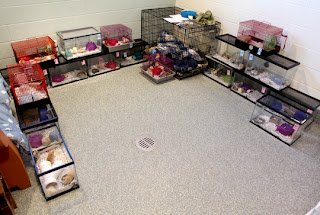 More than 90 hamsters were found in one man's apartment, well-cared for and kept in aquariums, buckets and Tupperware containers.
The Boehm Street man had 94 hamsters in total and decided on his own it was just too many. He went to the MSPCA's Small Animal Shelter at Nevins Farm in Methuen last week to let officials there know he had a large number of hamsters he wanted to surrender.
"The situation was not dire, so we asked him to wait a week so we could prepare for them," said Mike Keiley, director at the Methuen shelter.
Keiley said the man planned to take a cab to the shelter to turn over the hamsters. Instead, the MSPCA officials sent a van with two workers and the city's Animal Control Officer Ellen Bistany to the home yesterday to pick them up.


"He started with one hamster, and there got to be more and more," Keiley said.

That’s it: I’m orf to look for Phobos-Grunt.