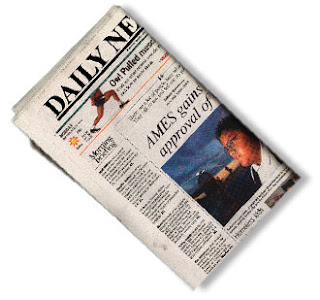 Just for a change some “real news”, not much because I have a busy day ahead.

From the BBC Firm 'sold workers' secret data' The information watchdog has shut down a company which it says sold workers' confidential data, including union activities, to building firms.

A raid on The Consulting Association in Droitwich, Worcs, revealed a serious breach of the Data Protection Act, the Information Commissioner's Office said.

The ICO said a secret system was run for over 15 years enabling employers to unlawfully vet job applicants.

Action is being considered against more than 40 firms who used the service.
Past and present customers included Taylor Woodrow, Laing O'Rourke and Balfour Beatty, the ICO added.

And rightly so, strange though that “they” will prosecute over data but not patients who die in the NHS.

From The Register-BT wins pricing control over faster broadband BT has convinced regulators to allow it to charge rivals whatever it wants for access to its forthcoming £1.5bn fibre network, following an intensive lobbying campaign.

Ofcom said today that BT Openreach will have to offer rivals equal access to the network, as it does to existing infrastructure, but price controls will be removed. "This will allow investors to make an appropriate return on their investment, based on the risk they are taking but pricing at a level that the market will bear," the regulator said.
It means Openreach will probably offer competitors the choice of reselling active wholesale products, or of installing their own equipment in exchanges. Ofcom said BT Retail must be treated without favour.

And guess who will pay in the end.


Oops The UK's military top brass are said to be "furious" that updated imagery on Google Earth has laid bare pretty well all of Blighty's defence infrastructure, including Faslane nuclear sub base, the "nuclear crisis HQ" in Northwood, North London, the SAS barracks in Herefordshire, GCHQ in Cheltenham and MI6's spook central in London.
One shaken military expert told the Sun that "the revealing snaps would make it easy for terrorists to launch accurate mortar or rocket attacks".
He doomwatched: “A strike on our nuclear capability would cause untold devastation. Terrorists could have a field day, knowing exactly where to aim strikes to cause the maximum devastation.”
And this information isn’t available anywhere else?
And finally.
Again from The Register Home Office plans to force CCTV on shops and pubs

If you’re planning to buy alcohol in the near future, and prefer not to have your mugshot made available to the local police, best to stock up now. Because, buried deep within the debate around the s.31 of the Policing and Crime Bill are provisions that will allow the Secretary of State to instruct your local corner shop - or pub - to instal CCTV and retain pictures of anyone buying alcohol for at least 60 days. Said pics will, of course, be available to the police on request.

This hasn’t been enacted yet but watch this space!

“Newspapers always excite curiosity. No one ever lays one down without a feeling of disappointment.” Charles Lamb

NHS-THE OTHER SIDE
Posted by Angus Dei at 08:08

Email ThisBlogThis!Share to TwitterShare to FacebookShare to Pinterest
Labels: news

I am surprised Google were able to get away with that. Perhaps they will be told to remove them?