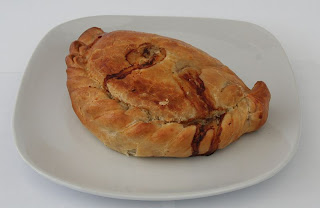 There’s trouble in the west-country Cornwall Gets Nasty Over Devon's Pasty Prize a pie maker in Devon has been given the prize for…..Britain’s best Cornish pasty.

The decision prompted anger among bakers in Cornwall, who said that firms from the neighbouring county should be barred from entering the competition.

An appeal to disqualify the winners, Chunk of Devon, failed. Some Cornish bakers are now threatening to boycott next year's ceremony.

Chunk was given the top prize at the inaugural British Pie Awards ceremony last week.

Matthew O'Callaghan, the chairman of the Melton Mowbray Pork Pie Association, who organised the competition, admitted that to have been eligible, pasties should have been made in Cornwall.

"There was supposed to be a disclaimer on the application form which stated all entrants to the Cornish Pasty competition must come from Cornwall," he said.
"It wasn't done and I have to admit it was an administrative cock-up."

However, Les Merton, the author of the Official Encyclopaedia of the Cornish Pasty, argued that cave drawings show that pasties, wrapped in leaves rather than pastry, were eaten in Cornwall as early as 8,000BC.

Yes, I’ve had one that tasted that old.

From a bit farther afield China orders officials to smoke Officials in a county in central China have been told to smoke nearly a quarter million packs of locally made cigarettes annually or risk being fined, state media reported.

The Gong'an county government in Hubei province has ordered its staff to puff their way through 230,000 packs of Hubei-produced cigarette brands a year, the Global Times said.

Departments that fail to meet their targets will be fined, according to the report.
"The regulation will boost the local economy via the cigarette tax," said Chen Nianzu, a member of the Gong'an cigarette market supervision team, according to the paper.

More than half of all male doctors in China smoke, but the government is now trying harder to get them to kick the habit in order to set an example for others, state media reported recently.

Make your bloody mind up!

A Swedish man and a Singaporean woman have been fined for strolling naked through a busy upscale bar and restaurant area for a stunt after a few drinks.

Jan Philip, 21, an exchange student with a local university, and Eng Kai Er, a 24-year-old Singaporean studying in Sweden, were each fined 2,000 Singapore dollars (1,300 US) for committing an obscene act, the Straits Times said.

In January, the two attracted much attention when they strolled naked through Holland Village, a place popular among expatriates for its bars and al fresco restaurants, apparently after drinking beer.

Singapore has strict laws on nudity and even magazines such as Playboy are banned in the city-state.

The two were fully clothed and wore sunglasses when they appeared in court on Thursday.

Maybe they should be banned from drinking.


Angola's flag carrier TAAG, already banned from flying to Europe, said Friday it had suspended a pilot and his co-pilot for landing at the wrong airport in Lusaka, the capital of Zambia.

The pilot landed the Boeing 737 at Lusaka City Airport when he should have landed at Lusaka International Airport during a regular stopover from Harare to Luanda on April 17, TAAG said in a statement.

"Because this is a serious incident, Angola's Aviation Authority and TAAG have opened an investigation into the matter," it said.

"TAAG regrets the grief this has caused to passengers and reiterates its promise to deliver a service with the highest security standards."

The state carrier was banned from EU airspace in 2007, the same year one of its planes crashed, killing six people on board. The government fired TAAG's board last year and created a commission to investigate and improve safety.

Angola expects the airline to be allowed to fly to Europe later this year.

Would you want one of these?

In a development that Darwin himself could not have foreseen, a beagle has become the world's first transgenic dog - and it glows in the dark,
The dog called Ruppy - short for Ruby Puppy - has been created by scientists in South Korea.

The puppy was bred to produce a fluorescent protein that glows red under ultraviolet light, but its red skin colour can also be clearly seen in daylight.

Byeong-Chun Lee, of the Seoul National University, headed the team that created Ruppy and her four beagle siblings, each possessing the bizarre fluorescent bodies.
Lee was also part of the team responsible for the very first cloned dog, Snuppy, born in 2005.

Team member CheMyong Ko of the University of Kentucky in Lexington, said of the breakthrough: "The next step for us is to generate a true disease model."

The hope is that, following the Ruppy breakthrough, transgenic dogs will become more effective stand-ins for the study of human disease.

Greg Barsh, a geneticist at Stanford University, said the creation of a transgenic dog was "an important accomplishment".

But he did not know of "specific situations where the ability to produce transgenic dogs represents an immediate experimental opportunity".

Nathan Sutter, of Cornell University in New York, said working with laboratory-reared dogs was "not on my horizon as a dog geneticist at all", claiming "transgenesis is laborious, expensive and slow."

Remember a glowing dog is not just for Christmas,

NHS-THE OTHER SIDE
Posted by Angus Dei at 08:36

What a strange thing to do to a dog!

apparently it's for experimentation, cruel I think.