Warmish, dullish and calmish at the Castle this morn, the garden needs a minor fettle-again, the elbow is almost fixed and his Maj has discovered the joy of ambush from under the stairs.

Long, long ago a daft old fart ordered some goods from far away country; USPS (United States Postal Services) took three days to collect it and another five days to send it by rowboat to UK Customs up Norf.
Then UK Customs (when they aren’t on strike) took four days to slap charges on it and then revised the charges, Parcel Force then kindly paid the VAT of £8.90 for the daft old fart and charged him the princely sum of £8.00 for the privilege. 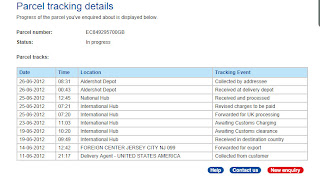 What happens then is that Parcel Force will send the daft old fart a letter telling him that he owes them dosh and to cough up or he can’t have his parcel, and when he does pay the ransom they will deliver his parcel probably when he is out and leave him a glad you weren’t in card.


But the daft old fart wasn’t that daft; he went to the Parcel Force depot, paid the ransom and finally took his shiny new parcel home. 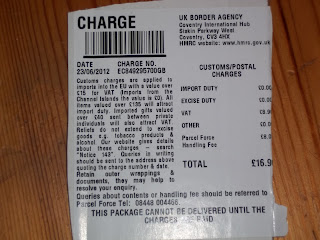 All in all it took the daft old fart’s parcel 15 days to travel from New Jersey (where the turnpike is) to dahn ere in ‘Ampshire and cost him £16.90 on top of the purchase price and original delivery costs.

And the moral of this daft old fart’s story is-if you want to buy something from the States-don’t....... 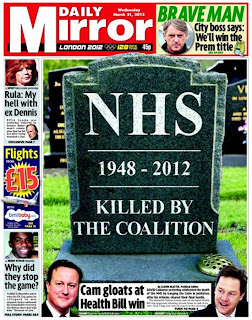 Apparently more than 30 NHS trusts could be forced to merge, devolve services into the community and make job cuts as part of a radical restructuring of hospital care across England.
Yesterday the Department of Health said it considered 21 hospitals to be "clinically and financially unsustainable" and in need of radical restructuring.
However, the list did not include another five foundation hospitals – run independently of the Department of Health – which are also considered to be failing financially. A further five foundation hospitals also have severe financial problems.
South London Healthcare NHS Trust, which is losing £1m a week, is likely now to be run by a special administrator tasked with putting it on a viable footing.
The trust, which runs Queen Mary's Hospital in Sidcup, the Queen Elizabeth Hospital in Woolwich and the Princess Royal University Hospital in Bromley is likely to face cuts to services and jobs in an attempt to reduce costs.
Department of Health sources suggested it was possible that other hospitals could also be put into administration. Those at greatest risk are understood to be Barking, Havering and Redbridge University Hospitals NHS Trust and Surrey and Sussex Healthcare NHS Trust.
Many of the problems faced by the affected hospitals are historical. Some have been burdened with prohibitively expensive PFI debts which they are struggling to service, while others are providing services which are now uneconomical.
Some hospitals are also trying to provide a full range of hospital services to relatively small but isolated communities and finding there are not the economies of scale to stay within budget. Said one source who could not be named as they are involved in hospital regulation.

That’s the problem when a Service becomes a Business......

Left to the place where people aren’t lazy 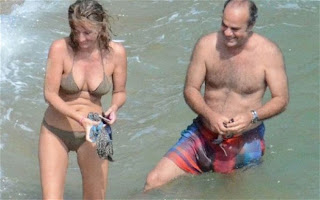 Bishop Fernando Bargallo, 57, was forced to hand in his resignation after photographs emerged this month showing him frolicking and embracing a woman at a luxury resort in Mexico.
Bargallo, who led the Argentine diocese of Merlo-Moreno outside Buenos Aires since May 1997, has reportedly admitted to having "amorous ties" with the woman he is seen embracing in the water, thought to be a divorced restaurant owner.
He had initially claimed she was just a long-time friend.
The news broke as the Vatican ousted the founder of an Italian mission for "serious immoral behaviour," after it emerged he had sex with female missionaries during a posting in South America.
Luigi Prandin, who founded the Villaregia Missionary Community, was ousted along with co-founder, Maria Luigia Corona, who knew of the liaisons but covered it up because she feared a scandal.
Ex Nazi Pope Benedict XVI has vigorously denied claims that abstention may have contributed to sex abuse scandals, insisting repeatedly that celibacy is central to the priesthood.

In April, he issued a rare condemnation of errant priests, slamming in particular an "appeal to religious disobedience" launched by a group of Austrian clerics in 2011, which argued for an end to priestly celibacy. 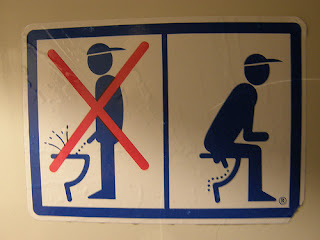 Politicians in Sweden are calling for new rules to ban men from urinating while standing up.
The local Left Party on the Sormland County Council wants men to sit down to pee in council toilets.
The socialist and feminist party claims that seated urination is more hygienic for men, reports The Local newspaper.
They say it decreases the likelihood of puddles and is better for men's health by more effectively emptying the bladder.
However, at least one expert, John Gamel, a professor at the University of Louisville, disagrees.
"Men scatter urine not so much during the actual urination as during the 'shaking off' that follows," he said.
"As a result, forcing men to sit while emptying their bladders will serve little purpose, since no man wants to shake himself off while remaining seated on the toilet."

That would take all the fun out of it, anyway wait until they get to a certain age, then they have to sit to pee.... 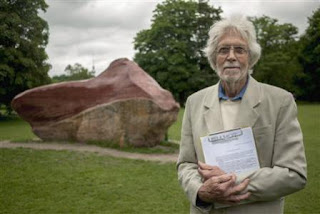 The Venezuelan government is championing the Pemon Indians of the "Gran Sabana" region by demanding the return of the polished stone known to them as "Grandmother" from Berlin's Tiergarten Park.
Caracas is calling it robbery, and the sculptor arguing that the stone was a legal gift.

Bet that didn’t fit in his hand luggage....

Up a whimsy from dahn ere in ‘Ampshire 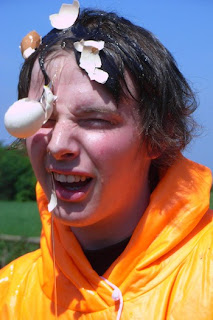 Hundreds of sports enthusiasts from all over the world descended upon the Lincolnshire hamlet of Swaton to take part in the fiercely egg throwing contest competition held on Sunday.
Teams travelled from as far as Germany and South Africa to take part in the day's events, which included Russian Egg Roulette and Egg Trebuchet.
Eggs were hurled, tossed and launched by teams of competitors, cheered on by family and friends in attendance.
Eggheads could also pay £2 for three attempts at hitting bodybuilder Joel Hicks in the World Target Throwing with Accuracy Challenge.
Competing teams were raising money for a host of charities, with organisers hoping for donations to surpass the £10,000 mark.
President of the World Egg Throwing Championship, Andy Dunlop explained before the event: 'We are expecting records to fall. Ireland in particular seems very confident.
'We use a particular breed of chicken which gives harder shells therefore they should be able to be thrown over 70 metres,' he told the BBC.
The sport dates back to 1322 when a newly appointed Abbot of Swaton ensured attendance at church by providing peasants with one egg each.
However when the River Eau flooded that year, monks were forced to hurl eggs over to waiting peasants who were unable to attend the service.


They would have raised more if they just sold the eggs-seen the price of them lately?

Sir,
I read your blog with interest. To clarify, 1500 eggs used, all of which were past their sell by date, value was nil. If not donated, and purchased non waste eggs, would of cost £250. Cash raised by destruction of waste food £10,000. Monies raised used to support hospices, cancer reasearch, immediate care response. No PFI wastage and no politicians involved.
The World Egg Throwing Federation is a totally non profit organisation. All monies raised go to afore mentioned causes. Expenses are not drawn.
Andy Dunlop

That’s it: I’m orf to teach my laptop to recognise his Maj


And today’s thought:
Losing your head over the Olympics 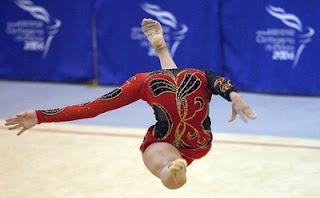 I'm sure there is a joke or three about Bishops? I remember something about 'firing a dirty old Cannon' but my memory is not yet fully awake this fine morn.
I never like to see food thrown around like those eggs.
Perhaps, they were past the sell-by-date?
Was John Prescott there I wonder? He'd be my favourite target. :)

A bishop invites a young priest over for dinner. During the meal, the priest can't help noticing how attractive and shapely the housekeeper is. Over the course of the evening he starts to wonder if there's more between the bishop and the housekeeper than meets the eye. Reading the young priest's thoughts, the bishop volunteers, "I know what you must be thinking, but I assure you, my relationship with my housekeeper is purely professional."

About a week later the housekeeper comes to the bishop and says, "Excellency, ever since the young Father came to dinner, I've been unable to find the beautiful silver gravy ladle. You don't suppose he took it, do you?"

Several days later the bishop receives a letter from the young priest, which reads: "Your Excellency, I'm not saying that you 'do' sleep with your housekeeper, and I'm not saying that you 'do not' sleep with your housekeeper. But the fact remains that if you were sleeping in your own bed, you would have found the gravy ladle by now."

A preacher wanted to raise money for his church and on being told that there was a fortune in horse racing, decided to purchase a horse and enter it in the races. However, at the local auction, the going price for horses was so high that he ended up buying a donkey instead.
He figured that since he had it, he might as well go ahead and enter it in the races. To his surprise, the donkey came in third!

The next day the local paper carried this headline: PREACHER'S ASS SHOWS. The preacher was so pleased with the donkey that he entered it in the race again, and this time it won. The paper read: PREACHER'S ASS OUT IN FRONT.

The Bishop was so upset with this kind of publicity that he ordered the preacher not to enter the donkey in another race. The paper headline read: BISHOP SCRATCHES PREACHER'S ASS.

This was too much for the Bishop, so he ordered the preacher to get rid of the donkey. The preacher decided to give it to a nun in a nearby convent.

The paper headline the next day read: NUN HAS BEST ASS IN TOWN. The Bishop fainted. He informed the nun that she would have to get rid of the donkey, so she sold it to a farmer for $10.00.

The next day the headline read: NUN SELLS ASS FOR $10.00. This was too much for the Bishop, so he ordered the nun to buy back the donkey, lead it to the plains, and let it go.

Next day, the headline in the paper read: NUN ANNOUNCES HER ASS IS WILD AND FREE. The Bishop was buried the next day.

Pleased to hear about the eggs, but I'm also glad I was nowhere near. Don't old eggs stink of hydrogen sulphide?