Cloggy Cleggy: Where’s your mobile?: But I don’t have a wooden car: Fore! Shark!: Mountie and the Moose: and a pussy nest.

Enormous amounts of lack of warm, not a whimsy of solar stuff, just as much atmospheric movement and oodles of ex skywater at the Castle this morn; spent yesterday clamped to the toilet with my head in a bucket (or was it the other way round? The old memory isn’t what it was), my own fault I entered the dreaded doctors surgery without my bio-suit, wellies and disposable gloves and staggered through the heaving piles of snotty nosed, vomiting brats to get my anti falling dahn and laying in vomit pills, but the good news is that my rear exit has cooled dahn to red hot and the world has stopped spinning.

And talking of rear ends 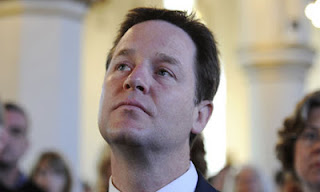 What’s his name, who apparently speaks five languages fluently, chose to conduct a recent meeting at the Cabinet Office with Herman Van Rompuy, the European Council president, entirely in Dutch.
“Nick enjoys being able to talk Dutch,” the Liberal Democrat leader's spokesman tells Mandrake. “Similarly, when he meets leaders from France or Latin America, he’ll speak French and Spanish. It’s very much appreciated when he goes.
"Usually at these meetings, there’ll be an aide who can speak Dutch, too, but [this time] I don’t think there was a No 10 aide there at all.”


Cloggy Cleggy’s mother is allegedly from the land of wacky baccy, which does explain a lot... 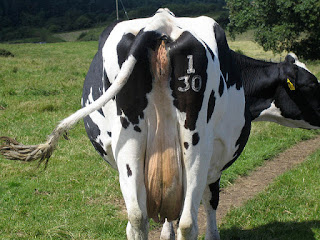 And here are the top seven or eight or nine or so.

One woman lost her Nokia when she baked it into a Victoria sponge cake intended for her daughter’s birthday party.

A couple on a cruise tried to photograph themselves re-enacting the 'I'm the king of the world' scene from the movie Titanic, but lost their phone over the side.


A Bristol woman in her twenties shamelessly told insurers that she'd worn out the vibrate function on her BlackBerry Bold 9900 by using it as an "adult toy".


One Liverpool girl in her twenties found out her boyfriend had been cheating on her and threw her HTC Desire X at him, but it hit the wall.

Another complained that her Samsung Galaxy was snatched by a rogue seagull while she was walking her dog on Barry Island in South Wales.
A pyrotechnician suffered another workplace accident while putting on a show at the National Fireworks Championships in Plymouth. It was only as the smoke cleared that he realised he'd left his iPhone 3GS in the 'blast zone'.

A man who told his insurance company his iPhone had been stolen by monkeys at a Safari Park. He was trying to film the animals at the time.

Meanwhile a tight arsed fan wanted to go to a Blur concert in Hyde Park without paying for a ticket. He ended up dropping his new iPhone whilst trying to film it from a tree.


A farmer claims to have lost his iPhone up the rear end of a cow while using it as a torch during calving.


Only the pyrotechnician and the Blur fan had their claims rejected by the company.
Now where did I put it? 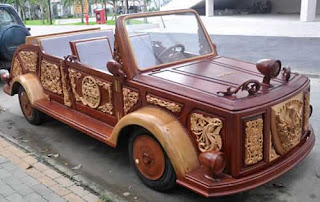 Featuring a body made exclusively from high-quality wood and decorated with intricate carvings, the Achilles has been turning heads on the streets of Ho Chi Minh City.
The one-of-a-kind vehicle was created by Le Nguyen Khang, owner of Binh Duong-based wood processing firm Le Lumber. He told reporters the idea of building a wooden car started off as a joke, while he was talking to an English friend who works in the travel business. One day, he jokingly asked Khang, “Working in the wood processing industry, can you make me a wooden car?”
So he did; the sketch for his unusual automobile was completed in April of 2011, and with the help of 11 of his best employees, he worked on it for 16 months. The Achilles was finally completed last month, and as soon as he started driving it around the city, people assaulted him with all kinds of questions and requests to have their pictures taken with it.
The entire body of the 4.6m-long and 1.8m-wide vehicle is made from imported wood like xylia xylocarpa, ash, and walnut, His company logo is carved on the front of the car, on the background of a dragon, while the two front sides are covered with the patterns of a dragon, unicorn, turtle, and phoenix, the four traditional sacred animals which represent power, beauty, and nobility.


Hope he has third party, fire and woodworm insurance…

Left to the land of a waste of a walk 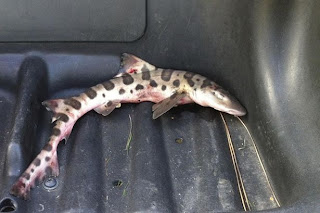 A worker at San Juan Hills Golf Club found a 2lb leopard shark on the 12th tee and put it into fresh water... before a colleague remembered it's a sea creature and mixed some salt into his water.
The shark had puncture wounds where it appeared a bird had snagged it from the Pacific Ocean, about five miles away.
A golf club employee rushed the shark to the ocean where it was very still for a few seconds before twisting around and speeding off.


That could ruin your stroke…

Up a bit to the place where her Maj still rules 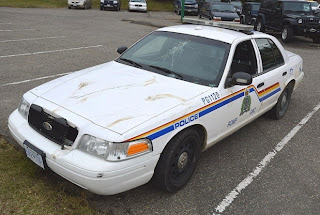 An officer with the Royal Canadian Mounted Police was injured early on Thursday after being charged by a bull moose while driving on patrol in central British Columbia.
The officer was driving toward two moose at an intersection in the small community of Prince Rupert in an attempt to head off another vehicle approaching the same junction.
As the officer neared the animals, a bull moose charged his vehicle, breaking the front bumper as it jumped on the roof of the car. The moose began stomping and kicking, and a hoof broke the driver's side window, injuring the officer.
The moose then jumped on the trunk of the car and finally back on the road.
The officer suffered bruising on his left shoulder, but did not require medical attention. He finished his shift and went home to rest, the police said.


insurance claim read- I was proceeding in a westerly direction when a moose jumped out and jumped onto the car, it then jumped onto the roof, jumped up and down kicking in the side window, jumped off and ran away:-nah they’ll never believe that Sarge….


And finally:
Where do you keep your pussy? 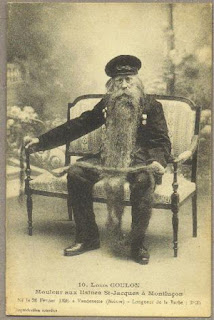 Monsieur Louis Coulon, born in 1827 was the owner of a 3.3-meter-long beard, and the progenitor of the "Hirsute Kitten Cathedral Look."
Kept his little pussy in his facial fuzz. 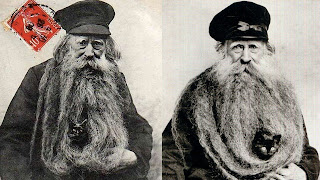 That’s it: I’m orf to do a bit of alchemy


And today’s thought:
What do you mean it’s on vibrate? 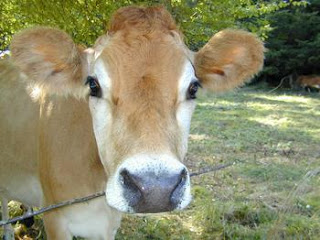 "... anti falling dahn and laying in vomit pills, but the good news is that my rear exit has cooled dahn to red hot and the world has stopped spinning."

Have you thought of giving up on those Tesco ready-meals?
They just don't 'agree with you', do they?

You could well be right Bernard the dietician:)

Apart from English which he mangles so much he sounds like he's telling lies all the time.

Maybe he should speak to us in double Dutch.

Wooden cars are wonderful - I want one.

"A Bristol woman in her twenties shamelessly told insurers that she'd worn out the vibrate function on her BlackBerry Bold 9900 by using it as an "adult toy"."
The prudes at the Telegraph did not print that one.

I thought he already did AK:)

We don't hold back at all and sundry banned, unlike the Torygraph:)